Another week has come and gone by in the world of the NFL. While we inch towards the finish line with the best of 14, it's quite amazing how fast the season goes by. Let us get into the action. 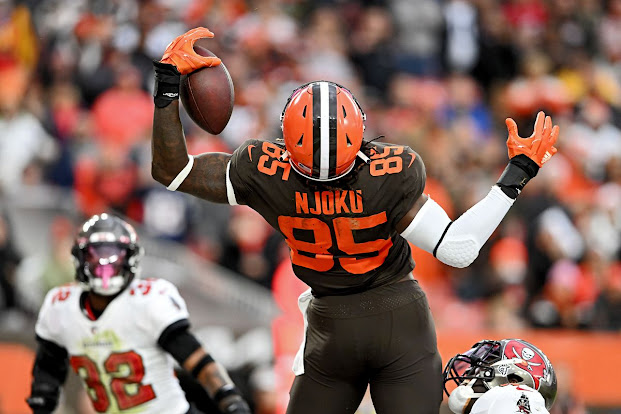 Color me shocked to see Jacoby Brissett ($0.74, -1%) knock off the GOAT Tom Brady ($10.94, 1%) Sunday. It remains to be seen just how deep the loss of Bruce Arians was to this team but something seems to be missing.

With Leonard Fournette ($9.21) inactive this game we were finally able to see Rachaad White ($3.04, 14%) take a bulk of the carries for Tampa Bay. White wasn't spectacular but was able to compile almost 5 yards per carry en route to 64 rushing yards on 14 carries and 45 yards on 9 catches. It was a decent day for him and outside of Chris Godwin ($10.96, 22%) finished second on the team in terms of receptions. Godwin and White were favorites of Brady in the game but in the end, it wasn't quite enough in the finale of the Jacoby Brissett experience in Cleveland.

Brissett will credit for the win as he gives way to Deshaun Watson ($14.53) beginning next week. But while Brissett gets the credit, Nick Chubb ($10.32, 9%) was the offense's engine. Chubb toted the rock an impressive 26 times for over 100 yards and a score. This is likely one of the final times we will see Chubb with a carry count this high with the return of Watson who is also a runner.

Outside of Chubbs' impressive day, David Njoku ($4.23, 17%) returned in action and posted a touchdown after connecting with Brissett. Njoku finished second in catches behind Amari Cooper ($8.02, 3%) who seems to be an automatic 10 yards when playing at home. In either scenario, both of these players figure to see their ceiling raised as well with the return of Watson and are inherently good values going forward. Long term I do believe the Browns passing attack should be worth an investment and we shouldn't write off Tampa Bay just yet even after losing to a Cleveland team that had no business winning this game. 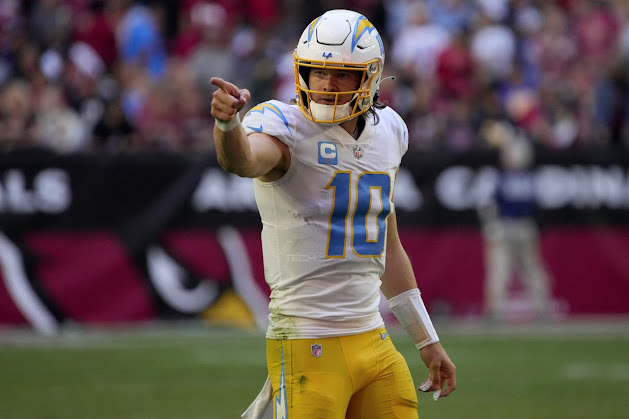 We finally saw Justin Herbert ($8.85, 12%) goes for over 300 scrimmage yards, after failing to do so over the past three performances. Herbert was able to play mistake-free football in this one throwing for almost 300 yards and 3 scores without throwing an interception.

By and large, while Herbert had a great day passing the ball, the Chargers were pitiful running the ball on Sunday. The Chargers had 13 total rushes, of which Austin Ekeler ($7.95, 5%) accounted for 5 of them for a meager 20 yards. Herbert led the team in rushing and passing yards. Perhaps the most impressive feat from Herbert on Sunday was that he threw for almost 300 yards without a single receiver over 100 yards. With Deandre Carter ($0.76, 40%), and Austin Ekeler leading the team in receiving yards and catches and both scoring it was impressive to see Herbert distribute the ball to so many different receivers on Sunday while also seeing Ekeler haul in 11 catches.

It wasn't all rainbows and sunshine for the Chargers, however. As reported early Sunday morning, Kyler Murray ($4.80, 8%) and Kliff Kingsbury had a coming to Jesus meeting of the sorts it sounded like. Despite playing a decent defense Murray brought his game on Sunday and if not for his defense at the end should have won this game.

Murray was able to complete almost 66% of his passes for 2 scores and almost 200 yards while also rushing for another 56 and a score as well. Murray put it all on the line to keep the Cardinals alive in the playoff race. However, without Deandre Hopkins ($5.60) and James Conner ($2.83, 8%), it's hard to see how they would be alive as well. With the return of Marquise Brown ($2.67) these three players are the only thing keeping the Cardinals alive in the playoff race. It is hard to buy into the Cardinals making the playoffs this season with their defense, but if they do it will be because of Murray, Hopkins, Brown, and Conner. I tend to believe they are values at the moment, if they turn out to be a mirage then perhaps Kliff will be coaching a college team in 2024.

In what I considered to be a playoff dormy hold for the Green Bay Packers, Aaron Rodgers ($8.90, -9%) had his back against the wall in a game that I believe was must win. After Sunday the Packers are sitting as the 11th seed needing to climb 4 spots to make the postseason.

What is fascinating about Sunday is that in a game that the Packers needed to win Green Bay dropped Rodgers back 16 times while relying heavily upon the run to beat the Eagles. Sure Rodgers threw 2 interceptions, but with the season on the line, one would have thought they let their hall-of-fame quarterback be the deciding factor in this must-win game.

Nonetheless, Rodgers left the game late due to injury, and out came Jordan Love ($1.02, 6%) in relief of Rodgers. Love looked competent out there and has given the Packers questions as to whether or not it is time to shut down Rodgers and see what they have in Love going forward. If Love does get a look in the future things are progressing nicely for Christian Watson ($8.30, 18%) who was able to rack up over 100 yards again for the Packers.

While the Packers weren't able to move the ball on the ground Sunday that was the exact opposite case for the Philadelphia Eagles. Jalen Hurts ($2.76, 6%) and Miles Sanders ($0.84, 34%) combined for 300 yards on the ground Sunday night. Sanders was a man on a mission rushing for 2 scores complimented by Kenneth Gainwell ($3.80) for an additional score. The Packers had no answer for the rushing attack of Philadelphia Sunday and it showed. With the recent injury to Dallas Goedert ($6.29), we did see the Eagles utilize Quez Watkins ($0.76, 21%) more than usual Sunday night and he might be a great bargain buy until the return of Goedert if he's able to see the field more as he was able to cash in on his role into a score as well Sunday night.