We've got another excellent week of action lined up. With the Seahawks' recent loss the NFC playoff race is wide open. So much so that even the Lions are in contention, which only happens once every ten years! 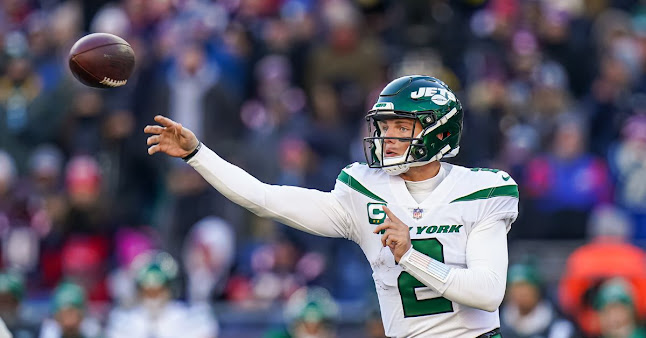 This game has suddenly been vaulted up to one of the most important games of the week for me. Not only is Mike White ($1.44, -6%) inactive, leaving us with the Zach Wilson ($2.84) revenge tour storyline, but both teams are in a battle for a playoff spot.

Jared Goff ($1.77, 12%) was an afterthought heading into the season with many pundits penciling in a signal caller for the 2023 class. To date, Goff has massively impressed with this season. While the Lions do have excellent talent surrounding him, he still deserves props for growing based on last season. With Jameson Williams ($2.88, 2%), D'Andre Swift ($5.98, -12%), Amon-Ra St. Brown ($16.46, -7%), and Jamaal Williams the sky remains the limit for this offense. They do have their work cut out for them in this matchup though as the Jet's defense is coming off another decent performance against one of the best offenses in the NFL.

The Jets are likely going to re-employ the Zach Wilson run-heavy offense. Likely not trusting Wilson based on historical performance, the Jets will likely try to run Michael Carter ($2.14, -16%) and Zonovan Knight while limiting the overall attempts from Wilson. There is an outside chance, however, that this game could secretly turn into a shootout if there was any development or progress from the benching. While I won't hold my breath on a Wilson breakout, if it does happen Elijah Moore ($5.09, 30%) and Garrett Wilson ($8.61, 4%) could see a big day in what could potentially be a shootout if the Lions' defense returns to their mid-season forms. 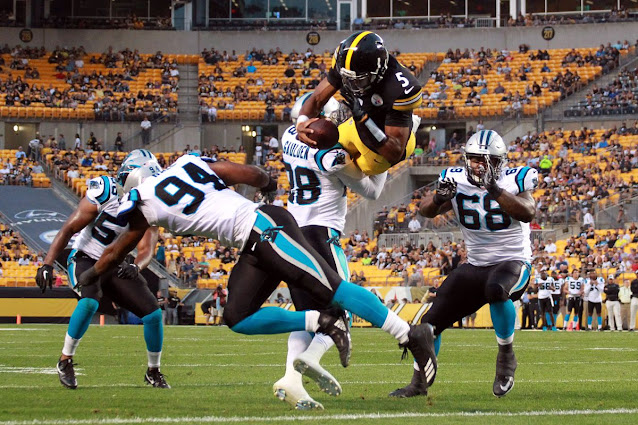 This game shouldn't mean anything but somehow after firing Matt Rhule (which as a Nebraska fan kills me) the Panthers have positioned themselves in control of their destiny. Sam Darnold ($2.55, -2%) is playing perhaps the most meaningful December football of his professional career.

DJ Moore ($0.58, -22%) was pegged as a potential breakout this season due to the Baker Mayfield ($2.55) acquisition, and that hasn't panned out. It remains to be seen whether he will ever develop into an elite receiving option and I'm not banking on that happening or any type of a breakout. In all, I'm not sure how this offense continues to get touchdowns on the board, but like Tim Tebow back in the day somehow it's happening. If they're going to make the post-season run they're going to need more good luck with matchups like Mason Rudolph ($1.04).

The Steelers' offense has been nothing to ride home about this season. Mike Tomlin doesn't feel very comfortable with his two options under center calling them 2A and 2B in Mitch Trubisky ($0.75) and Mason Rudolph. Neither option feels like a slam dunk, which is a disappointment for George Pickens ($4.18, 1%) and Diontae Johnson ($1.19, 5%). Najee Harris ($4.94, 2%) has been an incredible dud on the season as well. The panthers have a rather decent defense, and as such I'm not entirely sure this team is planning to move the ball. The safest Steeler this weekend feels like it's shaping up to Pat Freiermuth ($3.07, 3%). I think the Steelers could pull off the win, leaving the next game irrelevant, but in either scenario, this game does have relevance to the NFC playoff picture. Whether we like it or not. 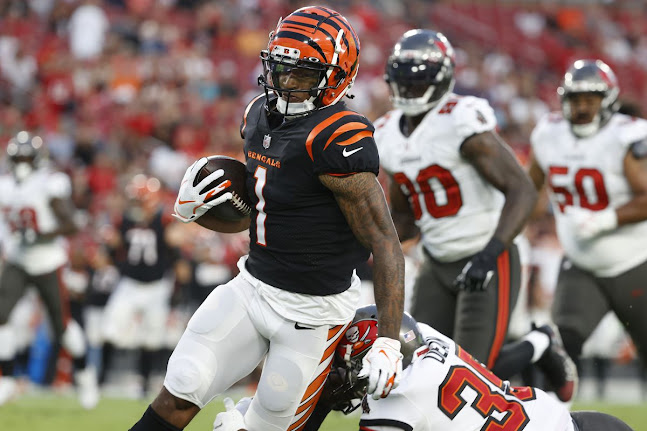 Tampa Bay, after being embarrassed last week, feels like it has reached a boiling point. The fact that they're staring at a crucial matchup against the Panthers in the coming weeks tells you all that you need to know. Tom Brady ($10.15, -7%) has had a difficult time getting protection which has hampered this team for much of the season.

Rachaad White ($3.24, -1%) however, is emerging as a serious factor in the Tampa Bay offense and has been a decent stash from the preseason. With the Bengals coming to town this offense could awaken against a less-than-stellar defense. While the Bengals' defense has been average, this game feels like an upset alert for the Bengals. Mike Evans ($6.76, -7%) and Chris Godwin ($9.80, -7%) are going to be factors and it will all come down to how the Bengals' defense plays and if they can get pressure on Tom Brady.

As for the Bengals, Joe Burrow ($11.22, -5%) is going to have to continue to make plays for the Bengals to keep their hopes of a possible #1 seed alive. With a date against the Bills coming they need to take care of business against a great Buccaneer defense. Joe Mixon ($12.64, -6%) and Ja'marr Chase ($11.30, 12%) are about the only healthy options after this team was ravaged by injury just a week ago.