Happy New Year everyone! Week 17 is upon us and we have some fantastic games ahead. There are several clinching scenarios with many playoff hopes hanging in the balance.

Oh, and check out our MERCH store here: https://store.predictionstrike.com/ ! Per your request, we've released some top-notch merch. There's a limited quantity and will only be around for a limited time, so make sure to get on it! 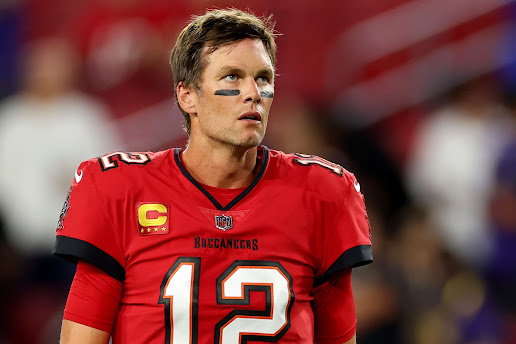 This game is the one for practically all the marbles in terms of who will win the NFC South. The fact that we're sitting here in December with Sam Darnold ($3.01, 17%) battling Tom Brady ($9.31, -9%) for the rights to the division goes to show just how unpredictable pro football really is.

The Panthers have no business winning this football game, especially considering that they traded for Baker Mayfield ($2.56, 11%) as the savior for Matt Rhule, and both of them are out of the Carolinas. However, just like earlier this season, we shouldn't rule out this team, as they beat Tampa Bay earlier after the shakeup. If they're going to pull off this upset, we're going to have to see them be as productive on the ground as they were last week against the Lions. After D'onta Foreman ($1.69, 32%) and Chuba Hubbard ($5.59, 14%) combined for almost 200 yards on the ground last week, it isn't impossible to think they can continue to do so again this week.

Sam Darnold hasn't exactly lit the world on fire this year, but over the last 3 weeks, we have seen DJ Moore ($0.78, 14%) come to life and be as good as many had hoped when they acquired Mayfield this off-season. As we have written the last 3 weeks, Terrance Marshall ($2.16, -1%) also still has life on this team as he has taken a step forward as well. The Tampa defense isn't the same as Detroit, they've had their issues this season but are still a challenging team to score on.

As for the Tampa offense…it's a crap shoot. The one thing we have learned this season is that if you give this team a glimmer of hope, Tom Brady will deliver the dagger still and will his team to victory. Despite having Mike Evans ($5.84, -13%) and Chris Godwin ($10.76, -1%) at his disposal though, this team hasn't been able to figure it out offensively at least consistently.

With a scattershot offensive line in front of him, Brady has been under constant duress this season and it's difficult to see it getting any better against a talented Carolina defensive front. Leonard Fournette ($13.10, 27%) will likely be relied upon heavily in the run and pass game again if they are going to thwart off the upset. In all, I think Tampa should win this game, but still believe it is a 50-50 shot and wouldn't be surprised if Carolina blanks them again this season and steals the division on Tampa’s home turf. 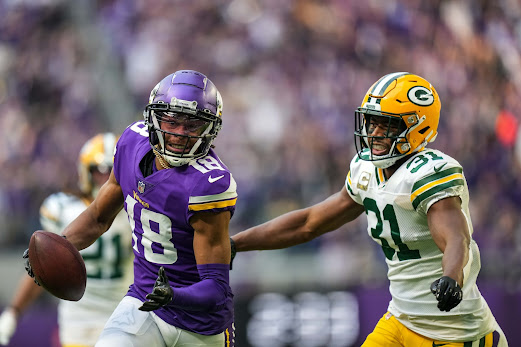 This is another divisional matchup, but the implications are far from the same as the Carolina game. Although Minnesota cliched the division weeks ago, the Vikings are still fighting for the #1 seed after Philadelphia lost to Dallas. While they would need the Eagles to lose out, it's not impossible with Jalen Hurts ($3.65, -1%) going down with a shoulder injury. Green Bay is battling to keep their season alive as they must win out and get some help just to make the postseason. Both teams have a lot to play for, and it's a bitter rivalry so it should be a fun one!

I said earlier this week that I don't think Aaron Jones ($5.24, -15%) will be back with the Packers next season based on his deal and I still believe that. In recent weeks AJ Dillon ($2.67, 9%) looks like the new sheriff in town and has received a bulk of the carries and scoring opportunities. Jones may have a strong game against this Viking defense, but I still expect Dillon to be heavily involved.

Aaron Rodgers ($7.52, -4%) also has his full rookie arsenal back in action with Christian Watson ($9.11, -3%) and Samori Toure ($1.39). While he hasn't been spectacular this season he looked like he was comfortable last week in Miami and should be primed for another great week considering the weather should be above-freezing.

As for the Vikings, they barely skated by the Giants this past week, and leave a lot to be desired. Kirk Cousins ($10, 8%) has looked remarkable this season except for the thumping they took against the Eagles early this season. Justin Jefferson ($17.26, 9%) should be in the conversation for MVP as well as this Vikings team would be a shell of itself without his services. The threat of Dalvin Cook ($4.54, -8%) is always real as well but he has proved unreliable to beat his projections week to week. 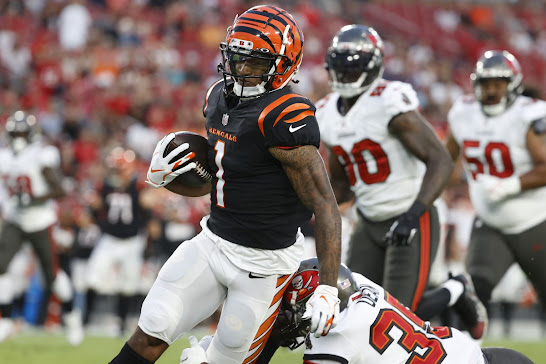 This one is for all the marbles, as the winner of this game is in prime position to take home the coveted #1 seed as either team would own the tiebreaker over the Kansas City Chiefs. Yes, Cincinnati would need the Chiefs to lose a game to take home the crown, but I don't think it is impossible for a week 17 or 18 upset to happen at Kansas City's expense.

The Bengals enter this game with an air attack that should keep Buffalo up at night. Tre White is a shell of his former self and this Bills defense is tasked with guarding Ja'marr Chase ($10.65, -6%) and Tee Higgins ($6, 20%) along with unicorn Joe Mixon ($12.51, 7%). There are simply too many options for Joe Burrow ($12.68, 6%) to throw to and it should be a problem for the Bills’ hobbled secondary. Buffalo does have a magnificent front 7 led by Ed Oliver but they surely have missed Von Miller in recent weeks. I think the Bengals should have a good night offensively Monday night with all the questions from the Buffalo secondary.

However, that doesn't mean Cincinnati is going to ride off into the sunset. I am not positive Buffalo wins this game, but I do know that Josh Allen ($28.24) will be a huge factor in this game. He is a human highlight reel, and he gets a defense that has gives up a ton of points when they play elite offenses. I predict this will be a big night from Stefon Diggs ($5.43, -17%) and perhaps another Dawson Knox ($1.65, 10%) game. James Cook ($3.46, 27%) could even play another big role as his versatility has been magnificent in recent weeks for this team.

I don't know what will happen in this one, but I do think there is a 50-50 shot this is a blowout in the Bengals' favor, or this comes down to whoever holds the ball last…much like the Chiefs-Rams a couple of years back.

Thanks for joining us and reading all the way to the bottom! Make sure to give me a follow @DynastyMad, and let me know what you think. I'm looking forward to talking stocks and stories with you all every week! Until then, remember, if you send this link to a friend, you'll BOTH receive free shares when they deposit of $20 or more: www.predictionstrike.com?referral=default