- December 13, 2022
The weekend flew by, and before we know it Santa will have delivered all the presents and the regular season will be done. With that said, it wasn't exactly an awesome weekend for competitive football but there were some storylines from the weekend we should be noting.
But before that... housekeeping reminder that you can still become a PS Black Member today. That includes: 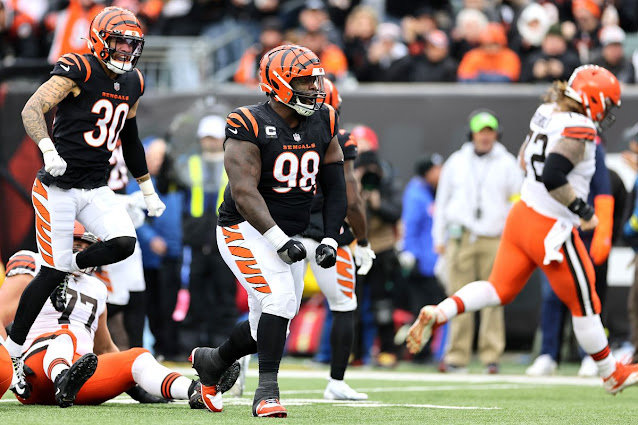 This game wasn't as high scoring as I anticipated, but we did see growth from Deshaun Watson ($11.98) in this game as he threw his first interception and touchdown as a Brown. While the box score doesn't show it, this was closer than met the eye as the Browns had several chances to score in the red zone.

As we predicted before the games Donovan Peoples-Jones ($0.89, 18%) has continued to be a target for Watson in his second game as he led the team in receiving yardage. The only player with a score for Cleveland was David Njoku who also appears to be a big-time target for Watson. In all, Nick Chubb ($8.11, -10%) put together another forgetful day for Cleveland, and I expect that to continue until this offense has an off-season to gel. With this loss that should all but almost assuredly end any Cleveland Brown playoff hopes.

The Bengals weren't as dominant as they looked just last week in their trouncing of the Chiefs. Joe Burrow ($11.22, -5%) threw for 2 scores but almost all the credit for this win should go towards Ja'marr Chase ($11.36, 12%) who led the team in receiving. Joe Mixon ($12.65, -6%) also returned and took 14 carries for almost 100 yards as well. In all, it was a 2 score game, but you never got the sense that Cleveland was completely out of it until the 4th quarter as Cleveland was able to move the ball. 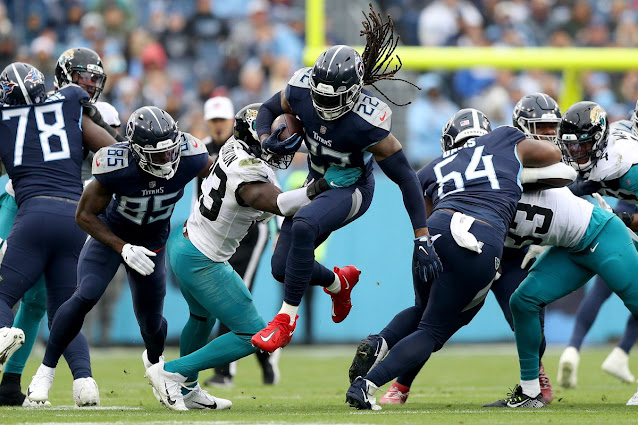 Tennessee fired their general manager recently, and my first thought at the time was that Mike Vrabel had won the power struggle. From the draft night when they decided to trade AJ Brown ($2.62, -4%) it was always clear Vrabel was not happy. However, if you're going to win a power struggle and show your strength you can't follow that up with a blowout loss to the Jacksonville Jaguars.

Ryan Tannehill ($5.50, 3%) wasn't spectacular but he played well enough to win this game if the Titan defense decided to show up at all. Tannehill threw for over 250 yards and 2 scores to his no-name receiving core of Nick Westbrook-Ikhine ($0.88, 10%) and Chigoziem Okonkwo ($2.19, 39%). In all, if this has any shot to win a Superbowl it's going to rely upon Derrick Henry continuing his brilliance the rest of the way and this defense figuring out how to stop the other team. Henry ran for over 100 yards but if the defense gives up over 30 points this team simply won't be able to win a game in the postseason.

Trevor Lawrence ($4.48, 25%) looks like he is getting warmed up as he has looked like the superstar we built him up to be. He was able to torch the Titans in this one tossing 3 scores. Another player who we were high on entering the season was Evan Engram ($3.62, 95%) who caught 2 of those scores and had over 150 total yards. The Jaguars employed a pass-heavy game script which spelled trouble for Travis Etienne ($3.39, -18%) as he ends the game with a meager 32 rushing yards on 17 carries. This team isn't likely going to be able to climb the standing this season, but if Lawrence can continue his growth this team could be an off-season away from finally competing for a division title again. 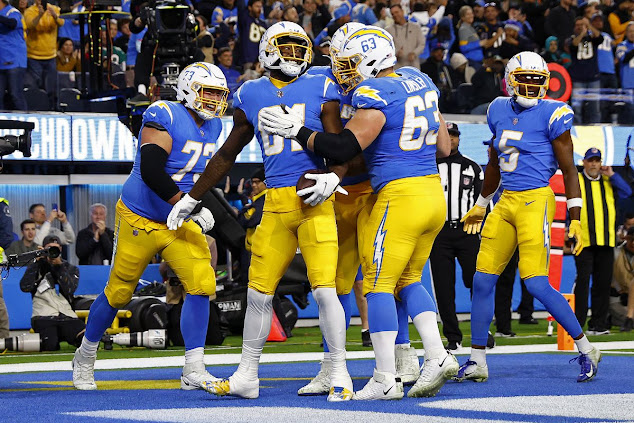 While every analyst at NBC decided the Chargers had no chance on Sunday night, the Chargers felt differently. And they took that personally.

It ceiling remains to be seen for the Chargers, as I don't believe they have the right head coach for this team. However, it's obvious Justin Herbert ($8.61, -1%) is ready to take the next step. I believe Sean Payton has his sights set on this job if it opens up and any investment in this team would go to the moon. For now, we're forced to be surprised with this upset of the Dolphins in which Mike Williams ($4.60, 24%) and Keenan Allen ($2.58, 9%) combined forces to remind us just how talented this team is. Austin Ekeler ($7.67, 6%) became the forgotten man last night, but this team has so much talent that is bound to happen. In all, the Chargers could have scored more, but a win against the Dolphins keeps them in the playoff race with a favorable schedule down the stretch. We just might not get to see a Raider Chargers almost tie this year.

As for the Dolphins…this team is set up to crumble down the stretch if they're going to play like they did Sunday night. Tua Tagovailoa ($3.70, -7%) looked hopeless as did the entire Miami offense. It's difficult to look at this team Sunday night, and tell yourself this team was in 1st place in the AFC East just 10 days ago. It looks like Tyreek Hill ($14.70, 1%) and Jaylen Waddle ($5.99, -16%) are going to have to get tougher at the line of scrimmage if this team is going to rebound down the stretch. If not for Tyreek Hills' heads-up play on a loose ball, this game could have been even uglier. In all, they have a date with Buffalo this weekend and a win keeps their AFC East title hopes alive. A loss and this team will be trying to swim against the current to make the playoffs.