Expert Analysis on the NFL Playoffs!

Playoff weekend has arrived, and the stakes couldn't be higher. In the final week of the season, we get Saturday, Sunday, and Monday action headed our way.

But before that... you should know we're running a...

The promotion is live now through Monday night. Receive a free share for every $25 in deposits, up to $5k. That's a maximum of 200 free shares. You know the deal.

And hey - if you want LOWER FEES, along with TONS of other cool features? Become a PS Black Member. And now on to our expert's analysis!

This is one of the more intriguing games on the slate for Saturday. Justin Herbert ($6.45, 6%) takes on the Florida prodigy Trevor Lawrence ($3.96, -11%). These teams met earlier in the season and the result wasn't particularly close with the Jaguars beating the Chargers 38-10.

Before the season Justin Herbert was the main attraction as one of the first quarterbacks selected in many dynasty drafts, and stocks. When these two teams met he was outgunned by Trevor Lawrence. Throwing for a single touchdown and an interception Herbert wasn't himself that day. While Keenan Allen ($3.32, 27%) missed that day, this time it will end up being Mike Williams ($4.05, -10%) who misses the action. I expect a heavy dose of Austin Ekeler ($8.02, -11%) in this contest due to the injury to Williams.

As for the Jaguars, I have a hard time seeing them dominate this contest as they did earlier this season. While they don't appear to have any major injuries headed into this contest, we shouldn't forget they barely skated by one of the least talented Tennessee Titan teams I've seen in some time. I expect them to struggle to contain Ekeler on the ground. Ultimately, I think the Charger defense can do better than they did last time containing Jacksonville and Lawrence and we leave this contest where the season started for Jacksonville. Christian Kirk is an excellent WR2, but this team needs an alpha entering free agency and the draft. 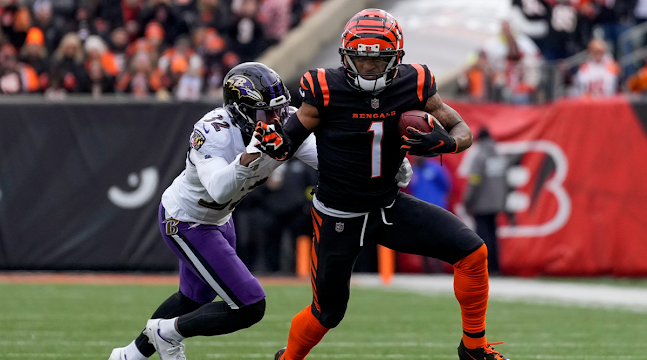 Ultimately, no coin toss was needed in this one. The Bengals dominated the Ravens 7 short days ago, and with Lamar Jackson ($3.67) it remains to be seen just how competitive this team can be.

Tyler Huntley ($0.82, 1%) enters this game much like Miami does earlier in the day, in that they have a chip and chair. No one is giving this team a chance to pull off the upset, and they have no pressure to win. JK Dobbins ($5.70) has been fantastic since coming back off injured and figured it to be a major factor if they can pull off this upset. He and Mark Andrews ($6.20) should be fairly healthy after getting rest last week when this team was handily defeated by the hands of the Bengals. Despite all the injuries to this team, a team with nothing to lose is a dangerous team.

As for the Bengals, Joe Burrow ($11.47, -10%) has been here before. Just last season he took this team to the promised land and fell just short of delivering a Lombardi trophy to Ohio. The team is fairly healthy, Tee Higgins ($4.77, -21%) got in a full practice this week along with Ja'marr Chase ($11.08, 4%). The offense is figured to be dangerous when on the field and why JK Dobbins will be a key factor if an upset can be pulled off. If Baltimore can control the clock and not get into a track meet Sunday night, then Baltimore can indeed pull off this upset. Playing a team three times in one season is a challenge, especially if JK Dobbins can average almost 6 yards per carry as he did earlier in the season before returning to full health. 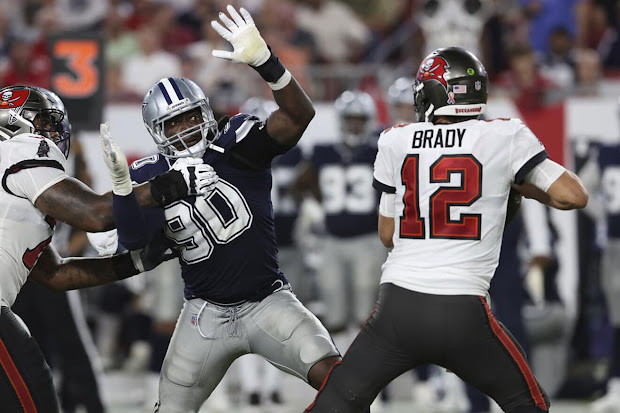 The game that epitomizes the largest inequity in the NFL. The team with the superior record travels on the road to the team with an inferior record. While many people hate this rule, I don't mind rewarding a team for winning their division, no matter how inferior. It goes both ways honestly, the Patriots used to get 6 easy wins a year increasing their odds of getting a bye week.

In either case, I don't believe this game is a slam dunk for the Dallas Cowboys. Coming off a putrid performance, one that was reminiscent of their week 1 performance against Tampa Bay, they can't afford to out flat and let Tampa Bay hang around. Dak Prescott ($7.08, -12%) at some point is going to have to earn his stripes and 160M deal.

It's funny that no one has mentioned how important this game is for Dak. This off-season he is likely to enter negotiations with Dallas as he will be entering the final year of his deal. Dallas could trade Dake post-June 1 and save 40M. if no deal has reached this off-season, Dak will be a free agent in 2024 as he has signed two franchise tags to date (the second was structured into this agreement) which causes his salary to increase by 44%, and his contract is structured so that he is not able to be tagged in the future (expiring two days after the tag deadline. This is why Dak has an agent…cough cough Lamar Jackson).

Tom Brady ($11.52, -6%) similar to Dak Prescott has some contract negotiations coming up soon, and perhaps much more important ones. Brady claims they are the healthiest they have been all season which tells me they could be as healthy as they were in week one…when they held the Cowboys to 3 points. Brady wasn't exactly lighting the world on fire in week 1, but he also didn't have Chris Godwin ($11.23, -4%) either. With Leonard Fournette ($9.60), and Mike Evans ($9.61) as well, I still think Brady can still be playoff Tommy. It all comes down to how much pressure Dallas can get on them, and if they can't get home it'll be home where they're headed.