- January 21, 2023
Day 2 of the Divisional Round is upon us, and the final 4 teams of the divisional round square off to fill out the top 4 teams in the NFL. The NFL saved the most intriguing games for last, and they should be a pleasure to watch as we slowly get our Sundays back soon enough.
But before that... housekeeping reminder that you can still become a PS Black Member today. That includes: 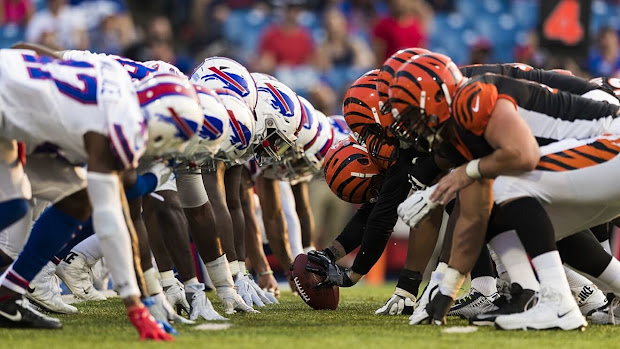 After last week's disastrous performance against the Miami Dolphins, I think this game falls into a coin-flip game for me on the chances the Bills advance. The one advantage the Bills get in this contest is that the Bengals will be without Alex Cappa and Jonah Williams along the offensive line. While watching the game last week it looked like they were giving Skylar Thompson ($0.76, -1%) all the time in the world which resulted in big plays to Tyreek Hill ($10.72, -4%). Unlike Skylar Thompson and Jaylen Waddle ($5.77, -11%)…Joe Burrow and Ja'marr Chase ($11.33, 2%) will make you pay if you can't get home and get pressure.

If the Bills are going to find a way to win this one they're going to have to get to the quarterback. They're also going to need to have their offense look more like the first half than they did in the second half last week. Stefon Diggs ($5.74, -3%) dominated the first half last week, and then after that, he was held in check and the Dolphins made the rest of the Bills' receiving core beat him last week. Gabriel Davis ($3.15, 25%) is going to have to go into playoff mode to help propel them should they end up getting into a shootout with this loaded Bengal offense.

Speaking of the Bengals' offense, it has been quite a while since we saw a breakout game from Joe Mixon ($11.45, -12%), and part of me wonders if he will have a banner game for this team. The Bills' defense is fairly beatable in both the passing and running game and it's hard to see them finding a way to slow down this team. I think this game could come down to the final possession and whoever has the ball last. I also feel like this game could be over in the first quarter and the Bengals could run away in this one if Tre White can't be the difference-maker in the secondary. 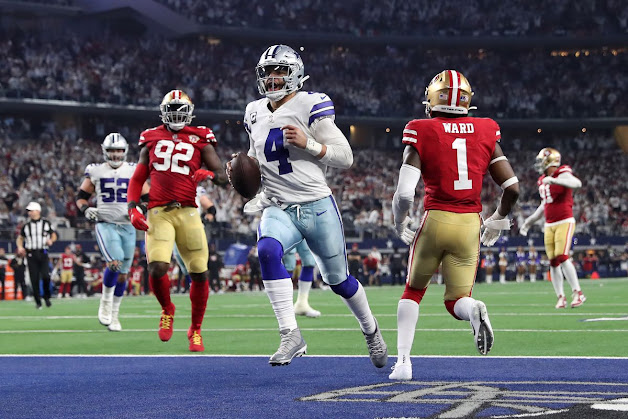 The final game of the divisional round of the playoffs. Just like last year the Dallas Cowboys get their shot against San Francisco except there is no Jimmy Garoppolo ($1.42) and instead, it's rookie sensation Brock Purdy ($2.56, 48%).

Dak Prescott ($8.85, 25%) is coming off one of the greatest performances we've ever seen from him. Granted there was little pass rush in his face on Monday he still looked fantastic. San Francisco has one of the better defenses in the NFL finishing bottom three in terms of passing touchdowns and top ten in terms of rushing touchdowns given up. If Dallas is going to advance to the NFC Championship they're going to have to earn it.

Michael Gallup ($1.15, 25%) and Ceedee Lamb ($3.64, -1%) figure to be involved in the passing game as they usually are for Dallas. I think if Dallas is going to score on this defense they're probably going to have to utilize Dak's mobility to exploit their defense and this is the time to do it now that they're in the playoffs. While Dak is entering contract negotiations this off-season he should be fairly carefree and knows how much a Lombardi trophy will do to his contract negotiations (ala Joe Flacco ($2.32)). As we've seen this season Dallas should see Tony Pollards' ($2.93, -5%) role grow as the games start to matter more and the use of Ezekiel Elliott ($4.37, -15%).

I think Dallas ultimately will be able to move the ball effectively, and the question then becomes stopping Brock Purdy and company. I don't think Brock Purdy has faced a defense as tough as Dallas is upfront during this magical run. Christian Mccaffrey ($19.46, -1%) is going to struggle to find running lanes in this contest and I think Dallas is going to make Purdy beat them and prove he is the real deal. I don't think he is, and this is the game that pops the Purdy balloon.