The Tale of Two Stars: Ben vs. Trae

Welcome to another edition of PredictionStrike's Weekly Update, where we'll break down some of the most interesting storylines, talk about the biggest & best performances, and try to tie it all back to athletes' stock prices and how we should be viewing the markets. 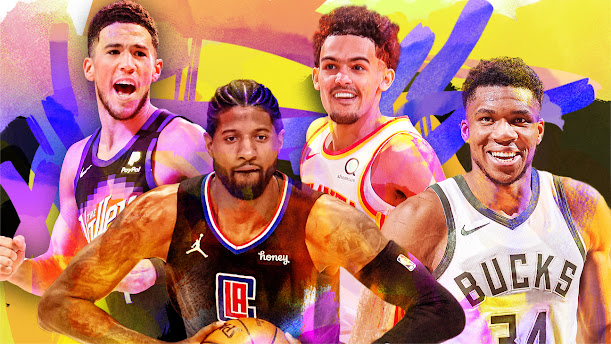 This is without a doubt one of the weirdest NBA playoff runs in the past 20 years. This weekend gave us two Game 7s and a Game 6 that felt like the 7th. The conference finals will feature the Phoenix Suns, who haven't been in the playoffs since 2010, the Los Angeles Clippers, who till this point have never made the WCF, the Milwaukee Bucks, who haven't won a championship since 1971, and the Atlanta Hawks, who haven't made the finals since they moved to Atlanta in 1969.

Either CP3 (0%, $8.36/share), PG13 (+35, $4.85/share), Giannis (+0%, $2.94/share), or Trae (-9%, $2.25/share) will win their first title over the next few weeks. Every team is dealing with injuries. Arguably the best two players in the WCF are currently on the sidelines. The Bucks SCRAPED by a decimated Nets team after some horrific offensive play, and the entire NBA is shocked by the Hawks somewhat of a Cinderella run. But all of a sudden... it seems like the Hawks are a real contender.

Trae and Ayton (-1%, $0.06/share) have each won 2 playoff series and made a conference finals before Luka (+6%, $6.33/share) has won 1. PG13 has officially (?) shed his Pandemic-P moniker. CP3 missing time in the playoffs is nothing new... but being the only player in the whole league to test positive for COVID? Guy can't catch a break.

If you're upset none of the "big" markets are participating in the late stretch of the NBA playoffs, I encourage you to put your binky down, wipe the tears, throw your big-boy pants on, and gear up for some high quality basketball now that Ben Simmons (-4%, $1.09/share) has been eliminated. More on that below!

But first, some stocks we've been watching recently...

Stock Up, Stock Down: 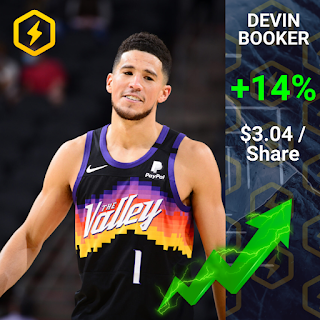 Devin Booker (+14%, $3.04/share): If you're not yet taking our stock recs, I'll humbly remind you that we had Book on our watchlist in last week's email, too. No CP3? No problem. Book recorded his first ever triple double in Game 1 of the WCF to secure the W as all those years of being the primary creator on those crappy Suns teams finally paid off, to the tune of 11 assists. As much as we love his playmaking, his shot-making looks even better. Give him a look anywhere on the court and you're in trouble. 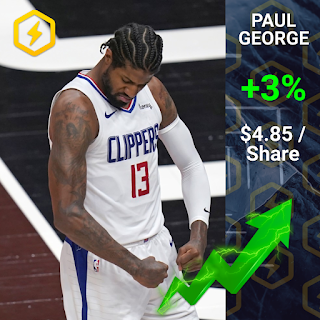 Paul George (+3%, $4.85/share): Pandemic P no more! We're still not gonna call him Playoff P cause you still CANNOT give yourself a nickname, but we're at least paying respect where its due. If Kawhi was near healthy, we'd hear about it. Even if he comes back, I imagine he'll be a bit hobbled. PG's usage is gonna continue to be at an all-time high as he co-stars the Reggie Jackson (+3%, $0.10/share) show, and it seems like he's finally cleared those mental hurdles that have been troubling him. 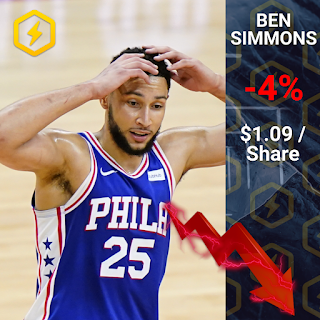 Ben Simmons (-4%, $1.09/share): Whew. This small section is going to be the only place on the interweb that won't pile on the Simmons slander... no promises about the next section. It's as simple as this - can his stock get ANY lower?! Ben WILL be traded. Isn't that we've always wanted? Whoever trades for him has to build around him and his ~$140MM remaining. That MUST mean point-center Ben + shooters. I'm buying, hoping for a rejuvenation on a new team, in a new offense.

Now that we've got you thinking in terms of graphs, charts, percentages, and earnings... let's take a closer look at some bigger trends and how they might affect players' stocks. 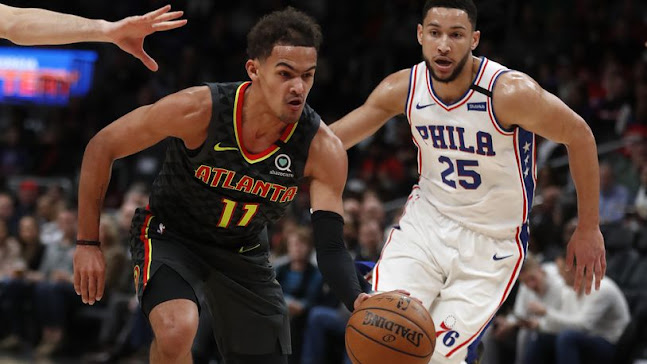 Two players, two stories. Where did we start?

Trae (-9%, $2.25/share) didn't even make an all-star team this season. When he was drafted, we had people like Bill Simmons saying he would be a bust and out of the league in a matter of years. Few thought he could be the face of a franchise and the best player on a playoff team, let alone a championship team, and many thought the Luka trade would be a timeless disaster.

Simmons (-4%, $1.09/share) was thought to be the next LeBron. He's been "the best" since he was in high school. His max contract just kicked in, he finished 2nd in DPOY voting, and even received one (fourth-place) vote for MVP.

Where are we now?

On live TV Sunday night, Shaq said he'd knock Ben Simmons out if he was on his team. Joel Embiid all but pinned the loss on him. His own coach, Doc Rivers, failed to go to bat for him. It's not a question of when he'll be traded... it's a question of where he'll go and how much the Sixers will be ABLE to get for him. All this for a guy who was almost traded for James Harden just months ago. Even the most ardent Philly fans will rewatch the play where Simmons gives up an open dunk and chip in for his cab fare to the airport. This play will define his time with the Sixers, but the whole post season exposed serious flaws. It was the same story as years before, just... worse. Defenses walled him off, slowed the game down, prevented transition buckets, and sent him to the line where he was historically bad. In his fear of going to line and missing, he refused to shoot time and time again, which allowed the Hawks to pay extra attention to the other guys on the court. He won't be playing in Philly again, and Sixers fans have no idea what to expect for him in a trade.

Trae, on the other hand, is heading to his first conference finals. His 5 seed Hawks shocked the world and defeated the 1 seed Sixers. They might not be the favorite going into the matchup with the Bucks, but after what we saw on the offensive end of the floor from Milwaukee in the semi finals... the Hawks certainly have a chance. He's a Tier 1 threat from any point on the floor, and he proved to us in Game 7 that he's going to be present and active in big moments. He had made 2 shots going into the 4th quarter and still hit the biggest shots of the game. Further, he controlled the offense for his team and instilled his confidence in everyone wearing the same jersey. He really, really believes he's the best player on the court, and he has quickly become one of the biggest stars on deck.

So, where are we going?

Where's Ben going? I don't know... Oklahoma? Sacramento? Washington? Sure, maybe... but what's coming back? Ben Simmons can still be a great player, but its clear that until he improves his shot, the roster is going to have be tailored specifically to his game considering he's got $140MM+ remaining on his contract. He's still a Tier 1 defender, a Tier 1 passer, and a maybe Tier 1 transition player, but how much is that worth when its been proven year after year that he's a major liability in the playoffs? Time will tell. More importantly to me though... as long as he's going to be traded, I'm buying his stock. It took a beating during these playoffs, and rests only at $1.09/share. We've been saying for years that he and Embiid (-6%, $6.55/share) can't play together. Even in a team that added as much shooting as possible, the spacing was still terrible. If a team builds around him, surrounds him with shooters and lets him play small ball point-center... which they basically have to if they commit to paying him, we'll see what Simmons can look like in an idealized world. Sign me up.

And for Trae? What else can we say. If you didn't buy stock after he shushed the Knicks MSG crowd, and you STILL didn't after he did push ups on the court in the middle of Game 7 against Philly... maybe you'll only be convinced by a finals appearance. Going up against Jrue Holiday (-5%, $1.68/share) in the ECF will be as sure of a test as we can give him, but you'd be silly to bet against him at this point. Trae is going to be here, in the spotlight, for a long time after this playoff run. We are watching a star bloom in real time, and I'm buying as much stock as I can get my hands on.