But FIRST. Dear, valued PredictionStrike user. Can you do us a HUGE favor? Actually, two. Here they are:
Now, let's breakdown the biggest stories out of the FIRST weekend of the 2021-2022 NFL Season.

Did Aaron Rodgers REALLY send that deep ball into the Saints hands to show the Packers his receivers aren’t fast enough?

Not for me to say, but good question. What would a week 1 recap be without some Aaron Rodgers drama? Jokes aside, this interception wasn’t the only instance Rodgers looked uninitiated this weekend. He went 15/28, totaling 133 YDs… plus 2 INTs and 1 sack. Per ESPN, his total QBR for Sunday was 13.4… the lowest of any active QB in Week 1. His passer rating per PredictionStrike was a stunning 36.8, also the worst of any at the position, and the player with the second worse rating scored nearly DOUBLE, Trevor Lawrence (+.22%, $8.30/share) at 70.1.

Still, it’s unlikely that Rodgers was actually sending a message to the front office that he was unhappy. Given the attitude Rodgers has been touting about the building, when things went south, he probably said F it and decided not to break a sweat. Not for nothing, he did end the day with his stock down -15%. Realistically, the guy was probably just rusty. We will never sweat a guy for vacationing and hanging out with his beautiful wife, but the truth of the matter is that Rodgers wasn’t with the team for most of the summer. I mean c’mon - there was a point where we didn’t even think he’d show up to training camp. Davante Adams (-9%, $9.43/share) can be as good as Davante Adams is, if the guy throwing to him hasn’t picked up a football in a few months, it’s gonna show. The Packers season isn’t done, it just hasn’t really started yet. If you think it starts next week against the Lions, consider this your chance to buy Packers’ stocks at a discount. If you think the season is over, maybe transfer some funds into... 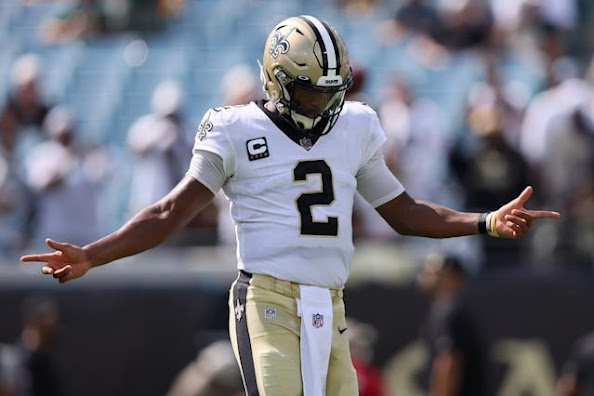 I want to remind myself, and you if you’re half as excited as I am, that it’s Week 1. That this is still the guy who went 30 for 30 (and not the ESPN kind) not too long ago. That this is the guy who did that STILL weird thing where he ate the “W” off his hands. But… the Saints beat Green Bay just as much as Green Bay lost to them. In the past, the Saints strong defense and short passing attack allowed them to rack up regular season wins without taking too many risks. But with less risks comes less rewards. Through 1 game, Sean Payton took advantage of what the best version of Jameis provides him and opened up the offense. The threat of the long game alone prevented the Packers from shortening the field for the Saints, like most teams would have done to them in the past. Payton took his genius play-calling and game-planning, mixed into a Jameis-led offense, and managed to tune down the overly aggressive aspects of the style we saw employed in Tampa Bay two years back. After all, as PFF points out, while Winston’s 8.9 YDs avg depth of target was higher than all but two games Brees had last season, it was also 1.5 YDs lower than any season of Winston’s career thus far. What might have seemed like a questionable pair when Winston signed on as a backup last year might have turned into a perfectly imperfect marriage between QB and coach.

What’s the Saints ceiling if Jameis can continue to be even a fraction of the player he was on Sunday? They probably won’t be able to touch Tampa Bay for the division title, but could they compete for a wild card berth? Absolutely. Marquez Callaway (-15%, $1.08/share) looks like he’ll plug the Michael Thomas ($10.27/share) hole in the offense just fine, and eventually… they’ll add Michael Thomas back to the equation. Besides, they saw super encouraging performances from Juwan Johnson (+49%, $1.49/share), Tre’Quan Smith (+36%, $0.43/share), Deonte Harris (+25%, $0.52/share), and so many more. This team could look a lot better than we originally gave them credit for.

But hey, if you don’t believe me on why we should trust Jameis, and why these gains are only the start of something special… maybe you’ll trust his predecessor, who couldn’t help but give praise. 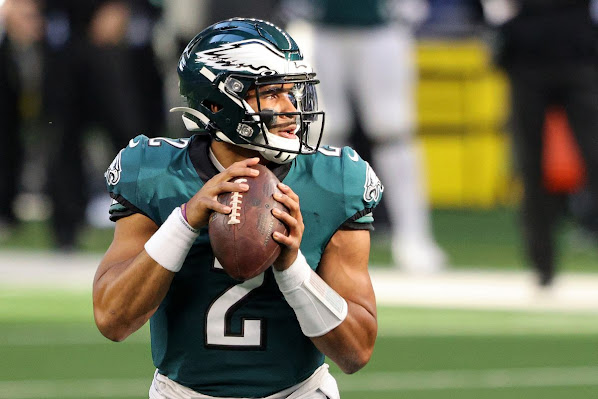 Are the Eagles NFC contenders?

If Jalen Hurts (+10%, $1.69/share) played like he did on Sunday… you bet they can! He threw for 264 YDs, going 27/35 with 3 TDs & 0 INTs for a 126.4 passer rating. The Eagles mostly ran a short, quick passing game balanced with a steady run and impressive support basically across the board from the skill positions, all of which highlighted what Hurts did well. It seemed like no secret that the coaching staff was being conservative to hide what they perceived would be his faults, but even when forced outside of the pocket, per SB Nation, Hurts completed 5/8 passes for 50 YDs and managed to scramble for another 15, impressing even the more skeptical of his doubters. It only hyped the believers up more that DeVonta Smith (+14%, $6.11/share) showed out just as well, going 6/8 for 71 YDs, including an 18 YD TD. Smith’s small frame ended up not mattering, since as Mina Kimes pointed out, you can’t beat him up if you can’t catch him… and he spent half the game yards and yards away from any of his defenders. This could be a super fun season for Eagles fans. Get your stocks, set your portfolios straight, and run it.

Hurts might already have one season under his belt, but this is kind of his real first chance, and its just the beginning. It’s also just the beginning for our guys Trevor Lawrence (+.22%, $8.30/share) and Zach Wilson (+3.5%, $6.23/share), who we have to mention before signing off since everyone loves talking about the rookie QB ups and downs. Let’s just quell any concerns from the unironic overreactions: it was game 1! This doesn’t apply to all players, all the time… but it definitely does for rookie QBs. Slightly positive stock performances are definitely a moral positive here, cause neither QB had the games of their careers. Did you know it was Trevor Lawrence’s first regular season ever (link)? CRAZY. But seriously, the Jags and the Jets seem like they’re gonna let their QBs go out there and learn it up this year. There will be downs but boyyyyy will there be UPs! That’s the fun of the rookie journey. We know these two are going to be in this league for a long time, so if you ask me, it’s time to buckle in and enjoy the ride.