What is going on everyone, and welcome to another exciting week! Enjoy it while it lasts, because it's about to get crazy! Right now, we are laser focused on week five of the NFL season, but in less than a month, we will have the NFL, the NBA, and the UFC all live on PredictionStrike! If you thought there was money to be made now, you just wait a month! There will be tons of gains to go around, and I will try my best to help you reel them in.

For today, we will focus on the NFL. And even more specifically, we will focus on one player I am head over heels for. Call me a fool, but if everything goes as I expect, this player has a chance to double in price before the end of the season… 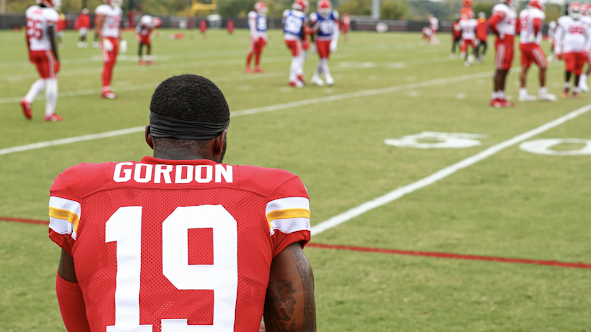 “The talent, you can just see how fast he is, how big he is, the way he’s able to get in and out of cuts. I’ve been able to throw to him a little bit here off to the side, and I think we’ll try to do whatever we can to bring him up to speed as quickly as possible and utilize his skill-set.” This is a direct quote from Patrick Mahomes (+10%, $19.21/share) when asked to describe new teammate Josh Gordon in a recent interview.

Now, you might say, Mahomes is just saying all the right things, that he would say that for anyone added to the practice squad, and I wouldn’t necessarily disagree with you. Yes, Mahomes is a professional, who knows how to talk to the media, but I would also say… actions speak louder than words. All practice squad players get praise from players and coaches, but almost no practice squad players are allowed to travel with the team on a road trip to sneak in a few more reps with the starting quarterback. But for Gordon, that is exactly what happened. Gordon did not dress for last Sunday’s game against the Eagles, but he did make the trip so he can build upon his rapport with Mahomes and the starting offense. To take it one step further, he was in the receiver line catching balls, and running routes before the game kicked off. If we truly believe actions speak louder than words, then we need to take this action seriously. Mahomes and Andy Reid have been insistent that Gordon will be a valuable part of the offence, but it’s actions like these that prove that the words are true.

Ever since Sammy Watkins (-2%, $1.36/share) departed, the Chiefs have been lacking in production behind Hill (+32%, $16.47/share) and Kelce (-15%, $11.15/share). Last week, we saw a  combined 4 catches for 39 yards for all other pass catchers not named Hill and Kelce. When an opponent has to send a cornerback to cover Kelce, and a safety to help even the best corners cover Hill, we find ourselves in a position where any decent receiver matches up with a number 2, and sometimes even a number 3 cornerback. Byron Pringle (-4%, $1.30/share) might not be able to take advantage of that situation, but a world class receiver like Josh Gordon should be able to. Gordon stands At 6-foot-3, 225 pounds, he is not only now the most sizable threat for Mahomes, he can beat one-on-one coverage. If you look into the Chief’s offensive needs the two glaring issues are red-zone targets and third down conversion. At 6-foot-3, and a knack for creating separation, Gordon can fill both those voids. Remember, when Gordon got reinstated, multiple teams were vying for his services. That would not have been the case if he wasn’t capable of creating a difference.

You will hear that he is 30, but do not get that confused with “washed up.” Here is a list of receivers who are either a year younger, the same age, or a year older, so basically all the same age. Adam Thielen (-13%, $4.12/share), Tyler Lockett (-8%, $4.75/share), Keenan Allen (-10%, $3.28/share), DeAndre Hopkins (-9%, $4.91/share), Cole Beasley (-9%, $4.91/share), and Julio Jones (0%, $6.26/share). If you want to call a fresh Josh Gordon washed up, then you need to throw that same shade at superstars like Thielen, Allen, and Hopkins. If you want to point out differences, let me remind you that the six players I listed above have been taking physical beatings on a week to week basis for the last decade, while Gordon has been taking care of his body, and training, waiting for his opportunity.

One more thing. The Chief’s are consistently among the top teams on a weekly basis with the highest implied team total. Points will be scored, so why not take a flyer on a cheap receiver who can make a dramatic difference? If you're asking me, I think it's time for Flash Gordon to remind everyone exactly how good he is. He is expected to dress as early as this Sunday against the Bills. Let's play out the investment possibilities. Scenario one: I am proven wrong, and Gordon comes back slow, unmotivated, and plays a handful of snaps. He is a nonfactor in the offense, and his projection on PredictionStrike never gets over 5 fpts, meaning his price will never move due to production. Scenario two: Kansas City realizes that they have a God awful defense, and the only way to make it to a third Super Bowl in a row is if they run the score up as much as possible. Enter Josh Gordon. Josh becomes another versatile weapon, and the missing piece to an already deadly offense. Worst case scenario, he never plays, and you lose 5% on your investment to eat the fees buying and selling the stock. The best case scenario, Gordon proves to be an endzone target for a dangerous offense, and you get in on a moonbound stock before take off. You do you, but I am getting on that rocket, and riding it into space. 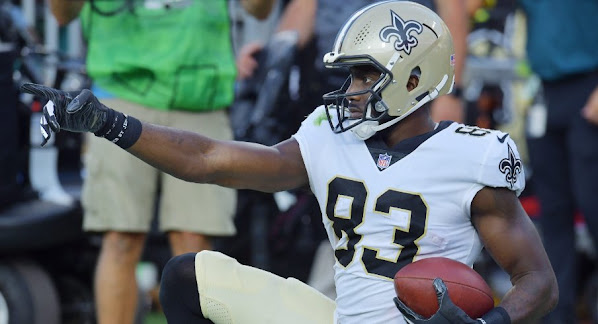 Ok, I said only one player, but I have another stock I have a really good feeling about. New Orleans Saints tight end, Juwan Johnson (0%, $1.12/share). If you listened to the Daily Dividend podcast this week, which you absolutely need to if you haven't already, I joined Nick and Dan to discuss some of my favorite stocks for this week. Juwan Johnson was one of my sneaky picks. At the time of recording, his projection was 4.6 fpts, and I said if he cracks 5 fpts, that he would be a smash buy. Well, as I’m writing this… Juwan Johnson is sitting at a projection of 5.1 fpts. This is the SWEET SPOT. If you want to get in on the meme stocks we have seen over the past couple weeks, and have a chance at a 60%, 70%, or maybe even a 100% stock increase, you need to find players like this. Juwan Johnson is a massive boom or bust type of play, I 100% admit this. In four weeks thus far, Juwan has two outings where he obliterated his projections, and two outings where he went without a single catch. If you have read enough Blue Chips articles, you know I am a diehard Washington Football Team fan. The Saints play Washington this Sunday. I know all the positives about the WFT offense, but I also am particularly aware of all the negatives on the defense. The biggest and most glaring hole in the Washington defense is linebacker. Washington knows this, and you better believe New Orleans knows this. Expect Juwan Johnson to take advantage of a lackluster linebacking core, especially in the red-zone. Speaking of the red-zone, let's talk about the Saints distribution in scoring position. Footballguys.com does a great job breaking down every player on every team, and tracking down “Red-zone looks.” The website describes a “Look” as any chance to score: a rushing attempt, a target, or a passing attempt. One does not need to be a genius to know Alvin Kamara (-11%, $8.34/share) leads the position player in “looks,” but you might be surprised with a second. Juwan Johnson. Juwan Johnson has three targets in the red-zone, and he has hauled them all in for touchdowns. Juwan’s three targets are equal to the same amount of red-zone targets the entire receiving core has combined. He has clearly created a relationship with quarterback Jameis Winston (-4%, $5.73/share), and I am expecting that to blossom even more against a weak Washington linebacker core. Again, this is a boom or bust play, so not for the faint of heart. If you can stomach the risk, jump in, but I totally understand if I stand alone on the Juwan Johnson mountaintop.

Alright, that is it for me guys. Remember to check out the Daily Dividends podcast, not just this week, but every week. It is in my rotation of weekly listens, and if you love PredictionStrike, it should be in yours too. Remember to follow @ChipsStocks, so you don’t miss any Buy Alerts, and interesting content throughout the week. I will hopefully be back Monday with an Insider Trading interview previewing the MNF matchup, but that is currently TBD. Until then, enjoy your weekend, watch tons of football, and make even more money!
Happy trading,
Alex True