There’s nothing quite like getting an extra hour of sleep headed into football Sunday! That’s unless you have children, and then there’s nothing worse than daylight savings time. After slugging through this past week of games, I think it’s far more likely the players were as groggy as I was, or at least I hope they were after this slate. 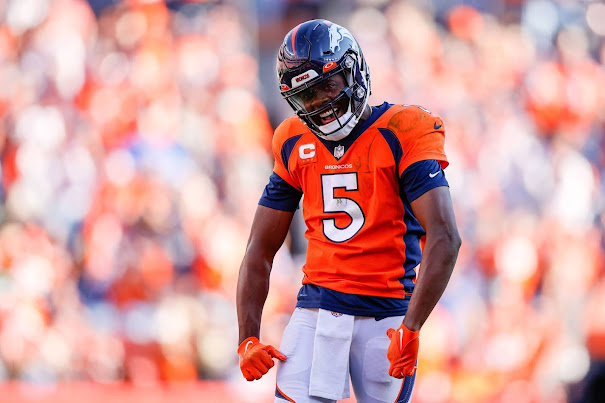 Every so often we see things that don’t quite make sense. The Broncos had their way against the Cowboys and this certainly qualifies. Entering the week Teddy Bridgewater (+9.2%, $2.08) was only expected to put up roughly 16 fantasy points, and for the first time in roughly a month, Teddy was able to beat his projections. Jerry Jeudy (+0.2%, $2.87) came back from injured reserve last week and has led the team in receptions each of the last two weeks.

I do believe in Jeudy long-term, and that it’s not a coincidence he has led the team the last two weeks. That being said, I’m not a firm believer in Teddy Bridgewater, and now seems like the ideal time to sell high on Teddy if you were holding any shares. It seems increasingly likely Denver will be looking for a quarterback next offseason.

On the other side of the ball, what a letdown for Dallas. Dak Prescott (-1.65%, $10.13) and the entire offense looked lost at the wheel Sunday. Entering the fourth quarter the Cowboys failed to put any points on the board. Coming back from injury, we should have expected a slow start for the Cowboys. While Sunday was a letdown for both Amari Cooper (-15%, $6.38) and CeeDee Lamb (-15%, $5.34) let's just chalk this up as a bad day at the office and buy some of the dip on one of the best offenses in the NFL. 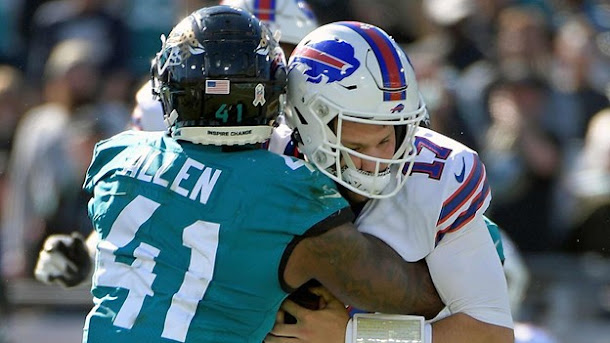 The Josh Allen storyline here became fairly tiring throughout the week. As a Bills fan who tries to be realistic, I saw little reason for worry headed into this game. However, Josh Allen (-15%, $16.96) simply wasn’t able to get the job done, and for the second week in a row, this offense has looked lackluster. While Allen was able to beat his projections late last week, this week he wasn’t even close.

While Allen bears most of the blame for such a disastrous performance, it’s fairly easy to see that this team is going to need to take a long hard look at the running back position. Zack Moss (-15%, $3.25), who left the game with a concussion, and Devin Singletary (+11%, $0.94) were simply not good enough to stretch the field. The Jaguars were prepared to shut down the pass and make the Bills beat them on the ground. With the injury to Moss, It’s fair to wonder if Singletary will carry the load or if there’s a window of opportunity for some short term gains to be had in Matt Breida (0%, $0.63) and possibly even relatively unknown Christian Wade (0%, $1.00).

As for the Jaguars, I imagine Urban Meyer telling his team “So what if we won ugly.” That’s exactly what he should be saying because in a game where James Robinson (-.2%, $1.81) missed they looked dreadful. Trevor Lawrence (-15.5%, $5.31) took a hit early and was dealing with an ankle injury and Carlos Hyde (-10%, $6.13) was largely ineffective as the lead back on the day.

While this game set back offensive football decades, it’s difficult to imagine the Bills not turning around these offensive woes. Josh Allen has formed a habit of correcting bad habits each week when these types of performance rear their ugly head. While the offense as a whole has looked lackluster the last two weeks I’m not ready to give up Allen or his talented receiving core. Pick your poison for buy low candidates the rest of the season as they all seem too set to rebound – Stefon Diggs (-6%, $8.89), Cole Beasley (-5%, $7.02), Dawson Knox (0%, $1.09), and Emmanuel Sanders (-5%, $2.41). 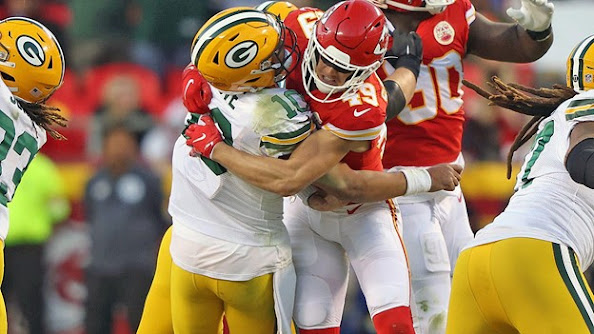 This week was truly an anomaly, and maybe we should have guessed that was the case when Aaron Rodgers tested positive for COVID. This primetime game was set up for two-star quarterbacks to duel it out, but instead, we had a different type of quarterback battle.

Jordan Love passed for more yards than Patrick Mahomes in a game that mirrored the futility of the Buffalo Bills vs. Jacksonville Jaguars. Throughout the game you had to feel for Jordan Love who looked like the nerves might have gotten the better of him. Finding out Wednesday that you’re set to make your first start and not getting your best receiver back until later in the week is less than ideal. While I was leading the charge on the Jordan Love parade early last week I’m not going to be selling short on the shares. While it’s concerning to see him struggle, it’s not uncommon for anyone to be nervous making their first start.

Headed into the week I wanted to keep an eye on Davante Adams (-11.6%, $8.67) and his target share and performance. I came away from this one fairly impressed with Adams and his separation. While he didn’t meet his projections this week I’m very encouraged about his long-term outlook when he hits the open market this offseason. He also likely gets Rodgers back next week and the bromance can come back to life.

On the flip side of the ball, I’m not sure what to think of the Chiefs. Part of me thinks that it’s irresponsible to not buy the dip on this offense. Patrick Mahomes (-13.40%, $12.89) is down almost 40% from his high earlier this year, and his talent makes him one of the easiest buys I’ve seen in quite some time. While he hasn’t hit his projections in the last 5 games I do think he will figure things out. Buying Mahomes now is almost like investing in the stock market during the early stages of the COVID pandemic. It feels as though he has bottomed out and the rebound is on the way.

As for Mahomes pass catchers I’m not looking to make any moves to buy anyone today. I’ve been saying since late last year Tyreek Hill (-15%, $12.99) is in a precarious situation. Entering the final year of his deal next year Hill refused to restructure his agreement this offseason. While I expect Tyreek to sign an extension this offseason it’s something to monitor. If Tyreek isn’t able to sign a long-term extension this off-season there should be a good window to sell this summer if need be. As for Hardman (-30%, $0.22) he’s likely not going to be with this team in 2023, and I’m just looking for the right time to sell him if he can have one more big game. 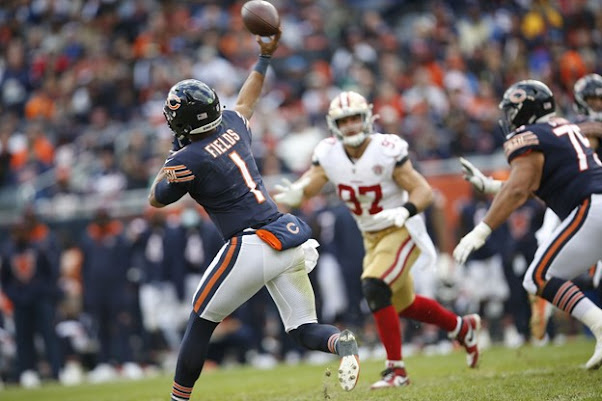 This had the makings of a defensive slugfest and needless to say it didn’t disappoint. Najee Harris (-3%, $9.49) continues to impress but wasn’t quite able to meet his projections in this one. This Steelers offense is going to flow through him the rest of the season because as we’ve seen all season Ben Roethlisberger (+3.14%, $3.49) isn’t going to threaten a defense.

I’ve been fairly high on Diontae Johnson (-7.62%, $2.05) and he was disappointed in this one. With a quarterback change on the horizon, his price seems to be too low for a player of his caliber. Diontae likely is going to be a project in terms of return on investment but if the Steelers can find a way to upgrade the quarterback position this offseason he should see an immediate boost.

Last week I said not to buy into the Justin Fields (+7%, $4.77/share) hype as Nagy was coming back to ruin the day. After Monday night Fields might end up saving Nagy’s job. With just under 2 minutes left Fields threw a dart to Darnell Mooney (+18%, $1.11/share) to take the lead. With back-to-back games above projections, Fields is starting to prove why so many people had him as high as QB1 of this rookie class. While the Bears lost Monday, Fields was playing with confidence at the end of the game and if he can carry that forward throughout the season his stock is likely to rise.

Other news and notes:

Thanks for joining us and reading all the way to the bottom! Make sure to give me a follow @DynastyMad, and let me know what you think. I'm looking forward to talking stocks and stories with you all every week! Until then, remember, if you send this link to a friend, you'll BOTH receive free shares when they deposit of $20 or more: www.predictionstrike.com?referral=a31609