It was a wild week in the NFL as we head into the holiday. In a week where 6 teams play on Thursday, it’s rather uninspiring to see all 6 of the teams come in with a loss. At the very least, at least 3 of the teams will be able to reverse their fortunes this week. 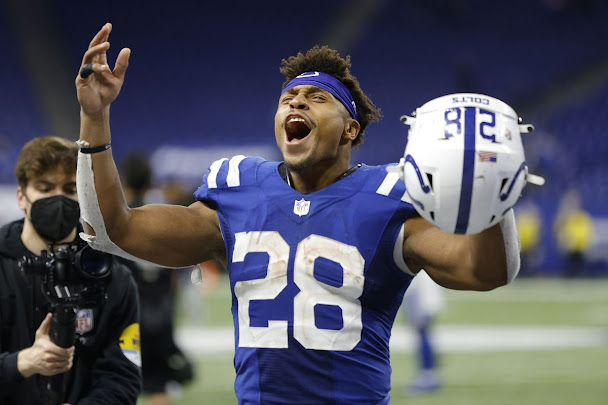 As you might have suspected I’m going to start us off on the highlight of the weekend in Jonathan Taylor (+47%, $14.70). After a performance like we saw Sunday, it’s not a question in my mind we will be seeing Taylor at the top of Round 1 as we enter fantasy drafts next fall.

Taylor entered the day trailing Derrick Henry ($31.77) in yards on the season, and that all changed after getting a lion share of the carries, with 32 of them. Taylor was able to convert those carries into 185 yards on the ground and 5 touchdowns in all between his carries and receptions. While Taylor had an impressive day accounting for 55% of the offensive yardage and 100% of their touchdowns. The rest of the offense was essentially told to “know your role and shut your mouth” as the Rock would say.

As for the Bills offense, they looked lost again for the second time in 3 weeks. While the Bills did route the Jets last week their offense has been out of sorts it seems for most of the season. It’s fairly easy to say that Emmanuel Sanders (-13%, $1.90) is not what he once was, and is holding the team back. If the Bills are going to be throwing the ball far more than they run it, then they should be investing in a solid #2 option behind Stefon Diggs (-1.38%, $10.19). With Dawson Knox (12%, $1.42) ascending into a solid tight end option for this team they’re going to need to find a way to stretch the field more. Could Gabe Davis (-5%, $0.98) emerge as an option down the stretch? 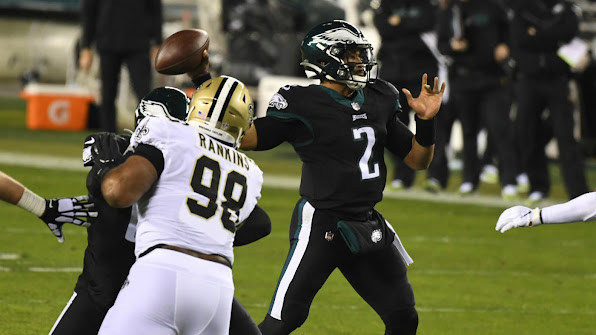 Another tight game as we near the playoffs was the Eagles and Saints. Since Jameis Winston ($6.37) has been sidelined, and so has Alvin Kamara ($10.29) sans one week after the injury. This has resulted in three straight losses and a decimated playoff probability. With the recent news of Taysom Hills’ (-1%, $4.58) extension and the structure of it, it begs the question if we’re going to see a quarterback swap as we enter the home stretch in the Saints' seemingly do-or-die situation.

If Taysom Hill does indeed come back into the picture it might save their season but again puts Kamara investors in a murky situation. When Hill took over last season we saw the wheels fall off Kamara and his value during that stretch. The Saints have no other options at this point and makes the most sense for them to see what they have in Taysom headed into a Thanksgiving matchup against the Buffalo Bills where both teams are desperate for a victory to keep their playoff hopes alive.

As for the Eagles, Jalen Hurts (13%, $1.90) is establishing himself as one of the best fantasy quarterbacks. While the narrative earlier in the season was his garbage time statistics, he has seemingly turned around his season and likely career. With the emergence of the Eagles ground game, Hurts has utilized the play-action efficiently and the wins have been piling up for gang green.

This past week we saw Miles Sanders (-9%, $0.71) tote the rock 16 times for nearly 100 yards, good for over 5 yards per carry. While we saw Sanders put up almost 100 on the ground we saw a similar output from Hurts along with 3 scores on the ground for him as well. It remains to be seen if Hurts’ rushing ability can be bottled up, and if it is can he be a polished enough passer to keep a defense honest. If Hurts can elevate himself to that level the sky is the limit for him and DeVonta Smith (-7%, $4.83). 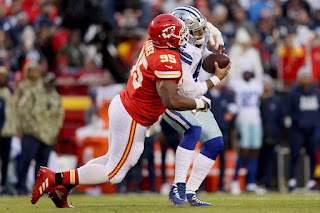 In a game in which we thought points would be plenty, we were instead treated to a defensive chess match. Dak Prescott (-15%, $8.98) came into the game after decimating the Falcons last week and put up a clunker.

Prescott and the Cowboys failed to put up points in this one. Prescott threw two interceptions and the offense never got going in the red zone which ultimately was the problem for this team. It was interesting to see Tony Pollard (-1%, $1.62) with Ezekiel Elliott (-6%, $8.10) split the backfield touches in this one almost 50-50. Together the two failed to produce over 100 yards on the ground.

As for the Chiefs, while they did end up winning this game they’re still in search of answers for their offense. In a game where they only scored on the ground twice, I’m not convinced this offense is clicking yet and it’s going to be interesting if they can find their footing. Clyde Edwards-Helaire (19%, $2.52) was back in action and led the backfield in carries. Clyde got most of the work out of the backfield getting 2/3rd of the carries to Darrel Williams’ (-15%, $1.99) 1/3rd. This will be something to monitor as his usage could grow in this offense after the bye week.

In either case, Patrick Mahomes (-15%, $12.70) prices have dropped as a result of this game and it gives us another chance to buy the dip on arguably the most stable asset of the last three years.