After another great week of action, we're getting ready for more playoff drama as Week 13 kicks off. Hard to believe we still have 6 more weeks of football before the postseason. I don't remember the last time the playoff race was so wide open. Then again Washington is alive in the playoff race so maybe this is an indictment more so on the expanded playoff field as opposed to the idea that there are truly 14 playoff-worthy teams. None the less, there are plenty of good storylines for us to watch this week. 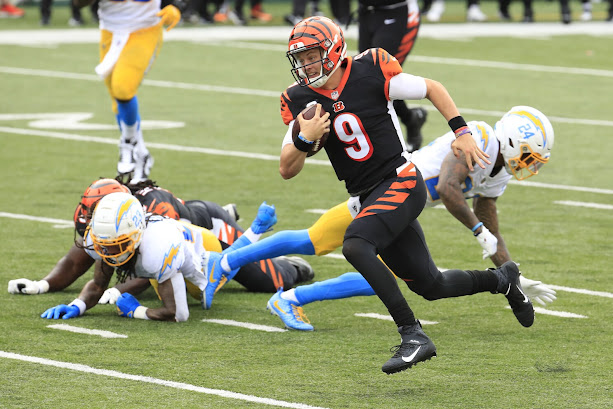 While the slate is packed this week with almost a full gambit of games, the quality of those games is a real question. Probably the highlight of the noon games this game offers plenty of intrigue as both teams came out of the gates hot this season but have cooled down recently.

Justin Herbert (-1%, $10.81) enters this one coming off his second 300-yard game in as many outings. While Herbert narrowly missed his projections last week he's still shown us he is a top-shelf player. While he hasn't his numbers in 2 of the last 3 games Herbert is showing us something we hadn't seen much of his rookie season. In the last three weeks, Justin Herbert has rushed for over 20 yards and is showing some of the athleticism I spotted on film coming out of Oregon. This rushing upside unlocks a projection's "cheat code" if he can continue the trend. However, this is a dicey contest if we're expecting Herbert to hit his expectations this week.

The Bengal defense not long ago was battered and bruised after being dinked and dunked on courtesy of Mike White (-1%, $1.08). In recent weeks the Bengal defense has improved slightly and isn't prone to big plays through the air. If anyone is going to have their way this week it's likely going to be Austin Ekeler (2.30%, $4.98). Considering the Bengals have given up a league-leading 2 40+ yard rushes, and 5 of over 20. Combine this with the fact that they're giving up over 4 yards per carry I think this is an area the Chargers will exploit.

As for the Bengals, this is shaping up for another solid outing for the 2020 fantasy bust, 2021 fantasy superstar Joe Mixon (22%, $17.40). Mixons' utilization has unquestionably led to his resurgence this year and likely is gearing up for yet another feast of a workload. The Chargers are giving up almost 5 yards per carry and have given up 11 touchdowns on the ground. The trend the past couple of weeks has hinged on utilization of the runningbacks and putting less pressure on Joe Burrow (-1.50%, $6.05) to throw.

As the Bengals move towards this run-first type offense it begs the question of the value of Ja'Marr Chase (-15%, $7.54). Chase has missed projections for the last 4 weeks after starting the season hot as a result, and the question becomes if we've seen Chase's ceiling already? I'd argue that Chase has exceptional talent, and is a great buy low this week or even next week if he misses projections. Consider that the Bengals have played the Jets, Browns, Raiders, and Steelers it's easy to see this is a symptom of playing porous opponents and not a sign of things to come.

Other Notes to Watch: 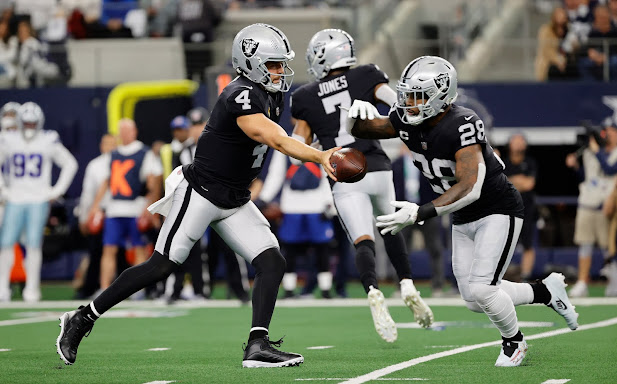 This is a rather big game concerning the playoffs but features little in terms of must-watch television. Taylor Heinicke (-9%, $1.10) has had somewhat of a resurgence the last couple of weeks but overall has been a flatline investment. It's fair to wonder what his situation will be should Washington make the playoffs this season. Will he become their full-time starter?

May have assumed that if he does indeed make the playoffs he could be their long-term starter. While the logic is there anyone watching the games can tell he is a good player but is not a perennial starter in this league. Should Washington make the playoffs my prediction would be that he suffers a similar fate to that of Tim Tebow where another starter is brought in even after a fairly successful season? That being said he could be a great short-term investment but I find myself reluctant to buy-in for the long haul.

As for the Raiders, who are slowly becoming a weekly mention for this space, I still have no clue what this does well. To start the season we saw Derek Carr ($6.96) lead the league in passing yards and in recent weeks we've seen him struggle to close out games. If we're to believe that Derek Carr is a franchise quarterback I think this is the type of game he is going to need to win. Carr is one of the only staples left from before the John Gruden era, and I still believe he will ask for a trade this offseason.

With Darren Waller (1%, $3.38) sidelined Carr is going to have to rely upon Foster Moreau ($3.48), Hunter Renfrow (-1%, $1.66), and vintage DeSean Jackson ($1.83). Considering Washington has given up a league-leading 26 touchdowns this season it's easy to see this game script going the way of the passing game with little focus on the run. While that sounds like a death sentence for Josh Jacobs ($1.53) he's quietly averaged 4 targets per game the last 3 weeks and is becoming more involved in this offense. I believe based on the current state of the Raiders Jacobs has the best potential to pay off long-term with his toe injury behind him and increased opportunity in recent weeks.

The Seahawks are at home against the San Francisco 49'ers this week in what looks like a blowout coming to town. However, if I've learned nothing in my life it's that not everything is as it seems. Perhaps this Seahawks team has been awful since Russell Wilson (2%, $10.59) has returned, but I'll never say they can't upset a team who 3 weeks looked just as dysfunctional. I do think we're seeing the end of the Pete Carrol era in Seattle, but I think the team will try and stay competitive down the stretch. Russell Wilson is going to have to play his best football down the stretch if he does indeed want to be traded this off-season. Also, they've signed Adrian Peterson. I don't think that matters, but had to mention that. 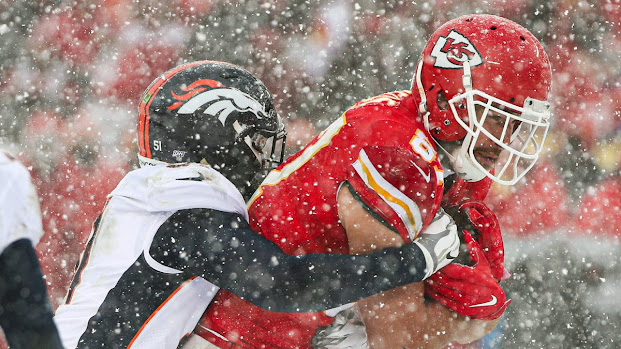 Patrick Mahomes ($12.69) again gets the Sunday Night Football spotlight this week. Hard to believe we're staring at Mahomes' price and just letting that be ok. While this Chiefs offense hasn't been spectacular Mahomes is still allowing us to buy low.

Lest we forget the last time we saw Mahomes he looked dreadful against the Dallas Cowboys defense. However, we shouldn't forget that the week before that we saw him throw 5 touchdown passes against the Raiders in that Sunday night showdown. If any team is likely to get hot and go on a run towards the postseason I believe this Chiefs team is the most likely to do so. Their defense has been spectacular and now draw a team who has given up 45 plays of 20 or more yards through the air this season. I think this will be a Tyreek Hill game on Sunday in a statement win over a division rival.

That being said this is a do-or-die game for the Denver Broncos. While they're alive for the playoffs a loss to the Chiefs here would be quite the blow for a team who once led the division at 4-0. Teddy Bridgewater (1%, $1.87) enters this game throwing a touchdown or more in 7 of his last 8 games, but only throwing multiple touchdowns in 3 of those 8 games.

This offense is designed to run the ball and Javonte Wiliams (21%, $4.96) figures to have a prominent role should Melvin Gordon (-5%, $8.70) miss time. I find it hard to believe Teddy Bridgewater wins this game without throwing for at least 3 scores and I find that to be unlikely.

As we gear up for the off-season now might be a good time to do a speculative buy on whoever we believe replaces Teddy next year (I believe this is inevitable). My picks would be public heels: Deshaun Watson ($14.51), and probably Aaron Rodgers (8%, $13.18). Both of these players would be receiving offensive upgrades than that of which they've had in the past. Some might even say that with their defense if they added one of these players it'd be a "dream team" but Vince Young might disagree.