With Thursday night's thriller in the books, we get our Christmas gifts early this year in the form of Saturday night football. With college football being over, and the extra week of action we get the Saturday night action for the next couple of weeks, which gives us plenty of time to invest in our favorite players and situations. However, as COVID tends to do, we've lost three games from our Sunday slate due to the outbreak raging across the United States.

And quickly, before we get into the action… a friendly reminder to UPDATE YOUR APPS. In the last month, our app experienced some bugs, mostly around logins. We got an update out fairly quickly, but its come to our attention that we did not broadcast that well enough. If you update your apps, all your problems will go away. Well, just the PredictionStrike ones. Anyway… 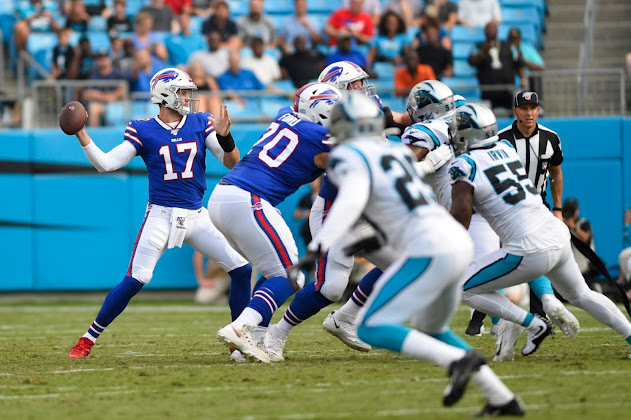 Another week, another game where the Bills make the article. While I'm a fan of the Bills, it's never my intention to write about them as much as I have. Similar to last week, the matchups we've been given for this slate make this game the most intriguing. With Cam Newton (-6%, $5.36) and company visiting Western New York in a must-win game for the Buffalo Bills.

Sean McDermott and Brandon Beane were both brought into Buffalo from Carolina at a time when David Tepper wasn't the owner of the team. However, McDermott knows firsthand how to frustrate and defend Cam Newton from his time there. While Newton is not what he once was, his athleticism is still there and needs to be managed. If the Bills take this team lightly, there's a chance they find themselves away ticket out of the postseason, and treating Newton as trash is a surefire to do that. If the Bills can make Cam beat them through the air, they stand a fair chance to win this game. The struggle is going to be on their run defense whose paint is starting to smear down the home stretch.

Offensively, I believe we will see the Bills offense we saw in the second half against Tampa Bay just a week ago. This is a team that still believes they're good enough to win a Superbowl, and that's because of Josh Allen (16%, $17.01). The success of Josh Allen's second-half might've been centered on Gabe Davis's (38%, $1.44) reemergence from last season. With Emmanuel Sanders (-15%, $1.27) seemingly being phased out of this offense, it's no question Gabe Davis is benefitting while flourishing for this team. As I said a week ago, Josh Allen is going to be one of the best buys down the stretch for this team as they're going to have to rely upon Allen if they're going to make it to the promise land. At this point, I'd hope you've sold off all your shares on any running back in Buffalo, as most of them likely aren't back next season.

Other Storylines to monitor: 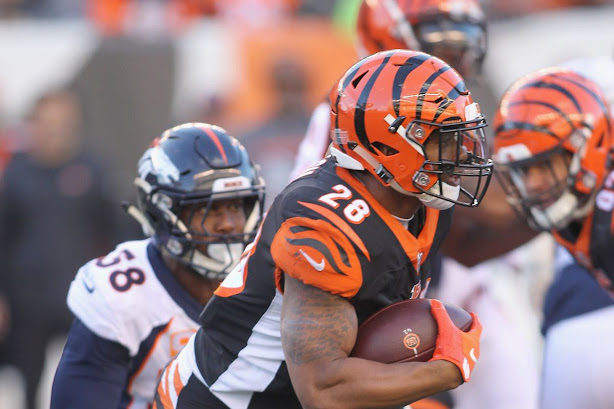 It's incredibly difficult to look at this game and see both teams with identical records. While The Bengals likely aren't going to win the Superbowl they're a team that's headed in the right direction.

During the NFL draft, many ripped the Bengals for their selection of Ja'Marr Chase (17%, $8.05) over Penei Sewell. The joked picked up more credence throughout training camp while Ja'marr Chase adjusted his game to the professional level, while also playing football for the first time in over a year. However, when you look at the impact Chase has had on this team this year, it's easy to say they made the right choice.

Throughout the season Joe Burrow (7%, $6.25) has struggled at times and thrived in others. Lest we forget Burrow is looking to finish his first full season as a starter and is only going to get better. While he thrived earlier on, the Bengals leaned on Joe Mixon (-12%, $13.36) in the middle part of the season, and now it looks like they're going to have to go back to relying on Mr. Burrow if they're going to be punching their ticket to the postseason. Burrow is one of the few cases where his value hasn't changed much throughout this season as he has hovered around projections throughout the season.

As for the Broncos, this is a team that was pegged fairly early as having a fake ID for the playoff party. None of their wins this season have been overly impressive, and their offense is in dire need of new direction this off-season. It has become painfully obvious in recent weeks the core of this offense is in good hands at receiver, running back, and tight end. While the offense has struggled most of the season now is the best time to buy Courtland Sutton (-15%, $1.75), Noah Fant (-2%, $0.54), and Twitter darling Javonte Williams (12%, $6.84). With the quarterback carousel coming in the off-season the guidance hinders a veteran coming and giving this offense a spark. With Aaron Rodgers (12%, $14.79), and possibly Russell Wilson (3%, $10.60), available this off-season either would provide a boost to these talented players.

As for now, as we watch this week I'd imagine we see a similar run-heavy offense behind Melvin Gordon (30%, $11.30) this week with Javonte nursing an ankle injury. Melvin Gordon is an interesting buy for me this off-season as well, as I believe he is still talented. With his talent, and the lack of it hovering around Buffalo I'd imagine this is a marriage we see this off-season based on how they do things. All in all, I project the Bengals to win this game convincingly and keep their playoff hopes alive.

Other News and Notes: 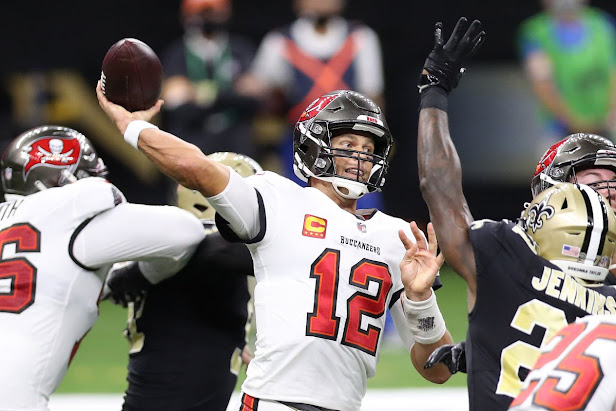 This game is starting to feel like a fraud, and similar to last week one has to wonder why this wasn't flexed out of the primetime slot. While I never like to bash teams it's difficult to see the Saints finding lighting in the bottle to pull off another upset of the reigning SuperBowl champions.

With Taysom Hill (8%, $5.20) nursing his Mallet finger the Saints narrowly defeated the New York Jets last week.  The Saints were leading the Jets by just one score entering the fourth quarter last week. Mind you this was a Jets team missing two of their best receivers, and rookie running back Michael Carter (1%, $5.01). Unfortunately for the Saints, the Tampa Bay Buccaneers are quite literally the opposite of the New York Jets offensively.

If the Saints are going to find a way to beat them, they're likely going to run Alvin Kamara (7%, $11.01) into the ground this week while getting him the ball creatively. With Taysom Hill not able to throw the ball as effectively as he wants, being creative is going to be a challenge to keep Tampa Bay honest from stacking the box. While I doubt the Saints will be able to move the ball much, Sean Payton is one of a few coaches who'd be able to pull this off.

As for the Buccaneers, Tom Brady (12%, $20.85) has been amazing all season and I don't see it stopping here. While the Saints have notoriously found ways to stump Brady, he's always been able to learn from his shortcomings. Tom Brady still hasn't won a game against the Saints in the regular season since bringing his talents to south beach, and you know that weighs heavily on him. I tend to believe the shootout we saw last week might fuel this offense the rest of the season, especially once Antonio Brown ($9.24) re-enters the lineup. The one thing to monitor in this one is whether or not Leonard Fournette (7%, $10.47) can play through his ankle injury, as he has found the fountain of youth this season. Without Fournette, it might be a little more difficult for the Buccaneers to win, but still, believe they snag Brady's first win.