With the holidays in full force and Christmas behind us, the NFL has gifted us more football this weekend. While our fantasy players are torturing us through the playoffs, at least we have football. As we look to turn the page on 2021, as does the NFL look to close out its season. With 3 weeks left, the AFC playoff picture is a complete mess. No better example of this is Buffalo sitting as the #7 seed, and still being mathematically alive for the #1 seed. The uncertainty makes more an exciting finish as we head down the stretch. 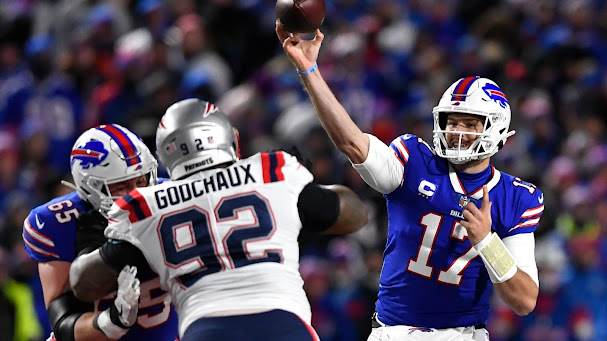 This has to be the game of the week, and NFL should be kicking itself for not flexing this game into primetime. While the Patriots are probably a little inflated as to what they are as a team, this game could decide who wins the division and who's on thin ice as a playoff team.

If the Bills are going to right their wrong against their division foe, they're going to be using a heavy dose of Josh Allen ($16.92). Just last year Josh Allen threw for 4 scores and 320 against this New England team. If they're going to beat them, they may need a similar performance. The Bills defense has yet to pay the price for their loss of Tre White, but it's coming in due time.

Lest we forget, in the second half of their last matchup in the wind bowl, Josh Allen was forced to pass the ball late and had success. This could be a blow-up game for Stefon Diggs (-6%, $8.28), and rejuvenated Gabriel Davis (41%, $2.03). As I mentioned a couple of weeks ago, Josh Allen was a screaming buy after a couple of bad weeks had diminished his value.

As for the Patriots, I'd imagine they're hoping for more wind. I believe the last game plan worked so well because they were able to hide Mac Jones (-1%, $2.54) to a certain degree against a team that would like to blitz and pressure him. This go-round, I imagine they're going to try and establish the run as best they can. Damien Harris ($1.20) returned to practice this week which likely indicates a split between him and Rhamondre Stevenson (-14%, $1.70).

If the Patriots are going to win this game they're likely going to have to shut down Josh Allen and win by their running game. While Mac Jones has looked like the most promising rookie, I believe the Bills' defense will be able to outsmart him through mixing up coverages and disguising blitzes. While I'm biased, I do believe this will be the most interesting game on Sundays' slate.

Other storylines to monitor: 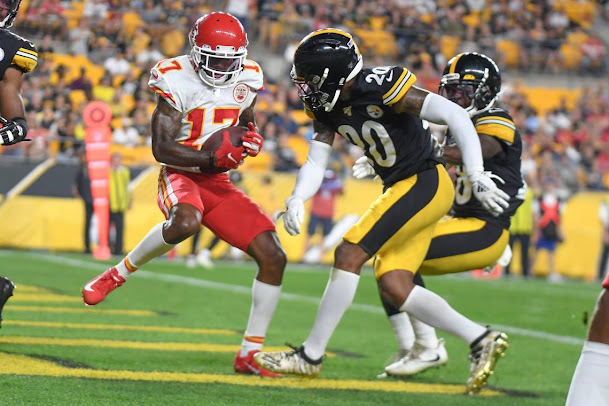 Last week this game looked like a bloodbath was ensuing for the Pittsburgh Steelers. However, as the nation deals with another influx of COVID-19 cases, so does the NFL.

It's unclear what their status will be for Sunday, but as of Friday, it looks as though the Chiefs will be missing Tyreek Hill (20%, $12.78) and Travis Kelce (37%, $8.80). This certainly will make things unnecessarily more difficult for a team that should have been able to cruise by the struggling Steelers.

With TJ Watt lining up on the opposite side it will no longer be a pancake for them. While the Steelers have given up 19 or more points in 4 of their last 5 games I expect a rebound here as Patrick Mahomes (10%, $12.38) is forced to put the offense on his back.

One bright spot for Mahomes is that the Steelers have allowed a 100-yard rusher in 3 of their last 4 games and over a 100 yards total in the last 5 games. While Mahomes isn't a rushing quarterback, this could be a potential breakout game for Clyde Edwards-Helaire (8%, $2.56). While Clyde has had to split work with Darrel Williams ($1.92), and Derrick Gore ($0.86), he still has been leading the team in carries since his return.

As for the Steelers, their offense has been a mess lately. While they have been scoring lately, their rushing offense has been abysmal as Najee Harris (-15%, $6.92) ran for just 18 yards last week. The key to this game is the short to intermediate passing game, and if Ben Roethlisberger (-6%, $4.29) is going to have enough juice again. If the Steelers can pass then this could be an interesting game keeping the Steelers' slim playoff hopes alive. 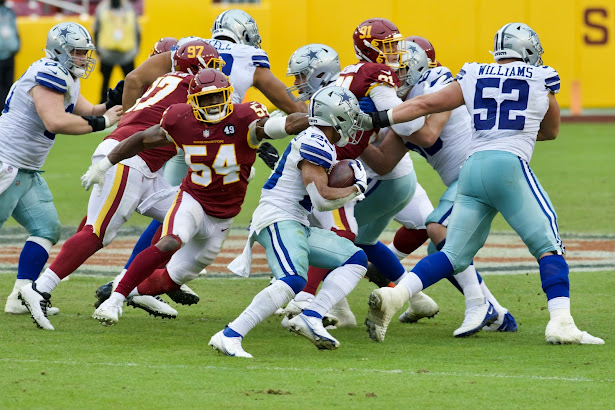 While there are better games available to move to primetime this isn't the worst of the worst. Washington is coming off of a dreadful performance against Philadelphia. However,  we should remember this is a team that was ravaged with COVID and was lucky to have enough players to play that game.

Taylor Heinicke ($0.91) was cleared earlier this week to return for this game and has a chance to get the Football team back in contention. Two weeks ago he looked lost, and I'm not sure if he has had enough practice time to learn from those mistakes. In watching that game it looked like there was an opportunity for Antonio Gibson (6%, $2.45) but he wasn't getting the volume of work to make a difference. I expect this game to tilt towards the run, and play keep away from the Cowboys.

Dak Prescott (-11%, $6.61) has been on quite the decline this past month. Over the last four weeks, he's down almost 40%. Perhaps it's related to the fact that neither of their running backs appear to be healthy, or their offense has been figured out. I tend to think that Ezekiel Elliott (3%, $6.29) not being healthy has been the main factor in their decline. Tony Pollards' ankle appears to be an issue and both are contributing to a lack of a running game.

If they can't get their run game going, I don't think their passing game is going to work. This will lead to more of the same vanilla type of offense we've seen. Dak hasn't thrown for more than a touchdown but one time in this last month, and that was against the lowly Raiders defense. Ultimately, I think the Cowboys do get the job down tonight, but it will be much closer than people would expect after the Tuesday debacle.