Here we are, 6 days after the Raiders kicked their way into the playoffs and we're gifted with 3 games on the docket. While most Sundays are enjoyable with the luxury of Sunday Ticket we're now in 1 game slate territory so there’s no guarantee of 3 competitive games. 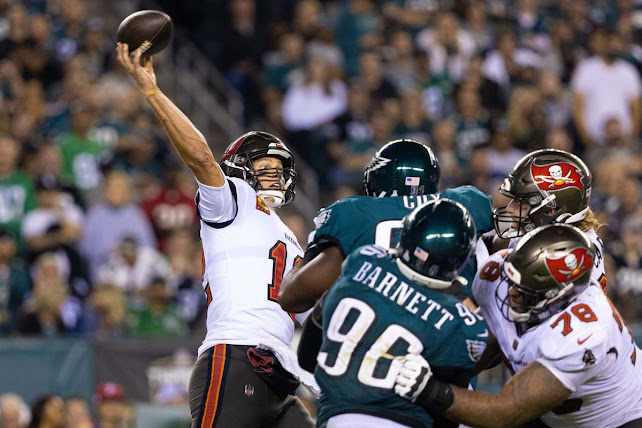 In what is sure to be a wet one Jalen Hurts ($1.52) is set to take on the Tampa secondary which is prone to mistakes. The hope for the Eagles is that they get Miles Sanders (3%, $0.66) back in the fold, but in all honesty, there's no guarantee he will be effective against the front four of Tampa.

If the Eagles are going to stun the Buccaneers they're either going to need to get the run game going or Jalen Hurts is going to have to be better than he was last time these teams faced off. Dallas Goedert ($5.08) and Devonta Smith (-9%, $2.98) are going to be key clogs in the passing game if he's able to move the ball. Overall, I'm not so sure that the Eagles are ready for the big stage of the playoffs quite yet.

Tom Brady (9%, $19.18) might not need to pass much in this one. With the weather, I'm not in love with the Buccaneers pass catchers this week due to the rain in the forecast. While Mike Evans (%18, $9.61) will have a role this postseason, I don't think that today is going to be the day. However, if you're dead set on insulating yourself for a deep Tampa run Breshad Perriman (15%, $1.59) is the cheap pass-catcher I'm hitching my wagon to.

The best investment as we head into the slate is going to be Leonard Fournette ($9.90) or Ke'Shawn Vaughn (3%, $4.45). With heavy rain and a strong run game, there's no reason for Tampa Bay to make this game complicated. The Eagles have given up the 8th most rushing touchdowns this season. With Tampa Bay still trying to find a groove offensively, I look for them to capitalize on the matchup with a run-heavy scheme this first round. 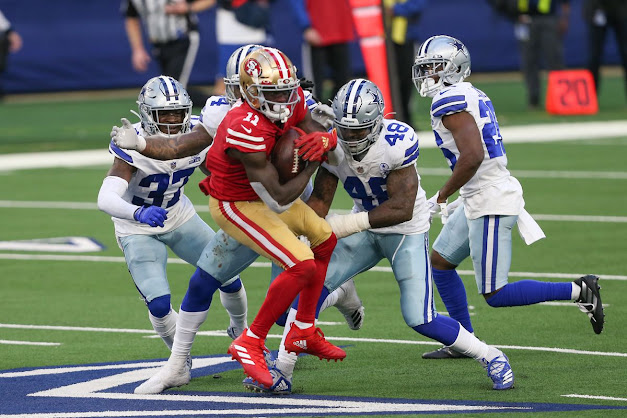 There's no other way to slice it for Dallas, this is one of the worst matchups for them. I don't believe that Dallas is operating with the talent advantage, but Mike McCarthy is 2-0 against Kyle Shanahan.

Dallas is considered to be loaded on offense with talent in the passing game and the running game. Ezekiel Elliott (-3%, $5.38) is anything but a lock this week to hit his projections. San Francisco is one of the best run defenses in the league. While they are in the middle when it comes to touchdowns given up overall this is strong run defense. The bad news for Dallas is the passing defense is in a similar boat.

The game plan should be rather simple for San Francisco, and that's run the ball. Elijah Mitchell (-8%, $1.95) is the bell cow of this offense and is gifted the matchup of a defense allowing 4.5 yards per carry. The Cowboys are a bend don't break defense, and if the run game doesn't get going for them having an injured Jimmy Garoppolo (4%, $2.14) throw against this defense could spell trouble. Overall, I predict a low-scoring affair with San Francisco ultimately prevailing. 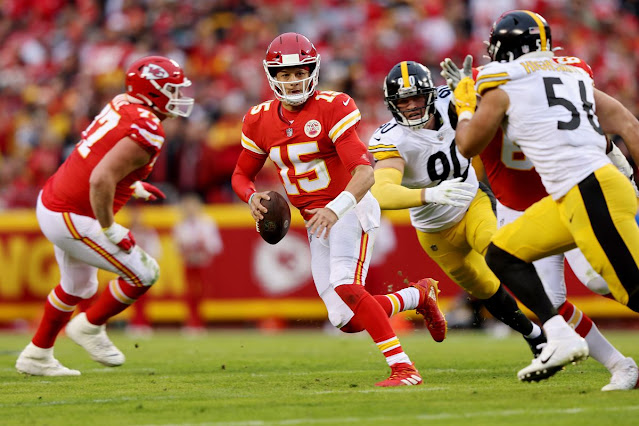 This game has all the makings of a good old-fashioned blowout, or does it? If Najee Harris (-11%, $7.18) isn't healthy for this game then indeed it will be a blowout. However, if Najee can a major contributor…this one isn't a slam dunk for Kansas City.

The game plan for almost any team against Kansas City is to get them off the field. While Kansas Citys' offense hasn't been tremendous, it isn't terrible. Patrick Mahomes (6%, $13.20) has shown us time and again why he is one of the best quarterbacks in the league. If teams give him a chance to shred them he's going to find a way. The Steelers are going to need some luck in this one, and early. If Tyreek Hill (-14%, $8.30) doesn't play or is used as a decoy I think the Steelers have a shot. TJ Watt is going to have to be more of a factor and Mahomes being down Hill could allow the pass rush that extra second to get home.

If the Steelers' defense can play up to snuff, then this whole game centers around Najee Harris. The only run defense that is worse than Pittsburgh is Kansas City. The difference between these offenses is one has a stud at the position, and the other has folk tale Darrel Williams (-15%, $2.15). The Chiefs are giving up roughly 5 yards per carry this season, and if the Steelers can use that to their advantage they could make history as the first seven seed to pull off the upset. As you can tell, I'm pulling for the Steelers in this one and predict that this could be the stunner of the season.