Well…here we are. After 17 weeks we find ourselves saying goodbye to over half of the league today. Week 18 is here, and with that, there's a lot on the line this week. With 18 teams headed home after today, and only 4 weeks of professional action, take the time to enjoy the final weeks of the season. 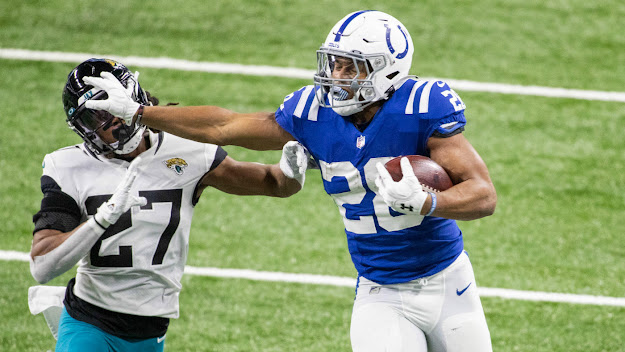 The playoff scenario couldn't be more clear for Indianapolis, win and you're in. However, it might be more difficult than you think. Think back to 2020 when the Jaguars went 1-15. Their only win that season? Week 1, against Indianapolis. The Colts haven't won in Jacksonville since 2014 when Andrew Luck dominated them.

This isn't to say the Colts are going to lose this game, or that I'm picking them. However, I am saying that it is not a slam dunk they will win and get in. After last week's embarrassing performance against the Raiders, the Colts need to bounce back in a big way. Jonathan Taylor (-3%, $13.08) is going to have to rebound, he hasn't hit projections since his walk-off touchdown against New England. The best way for Taylor to get back on track is Carson Wentz (-8%, $3.44) finding his efficiency. Taylor thrives when the threat of the pass is real teams can't key on Taylor, which opens up Michael Pittman (-7%, $1.83). All of these things are likely to happen against a bottom-of-the-barrel defense in Jacksonville but don't forget what they did to Buffalo.

Jacksonville is in a good position to surprise people this week. The last time they played the Colts won by a touchdown, and Trevor Lawrence (-9%, $2.80) failed to throw for over 200 yards or a touchdown. Nothing worked that day, and they almost beat out one of the hottest teams in the league. With Robinson out, it's not going to be a cakewalk but they can surprise the Colts and ruin several UnderDog Playoff best-ball leagues.

As far as Lawrence goes, the consensus is that he is a bust and hasn't lived up to expectations. Based on his current price he's an easy buy headed into next season, and I wasn't big on him coming out. It takes time for rookies to adjust, especially when they have no talent around them. Lawrence and Travis Etienne ($4.86) are screaming buys after the James Robinson injury. With a new coaching staff potentially on the horizon, I could see Jim Harbaugh coming to Jacksonville and taking this team to the playoffs in short order.

Other News and Notes: 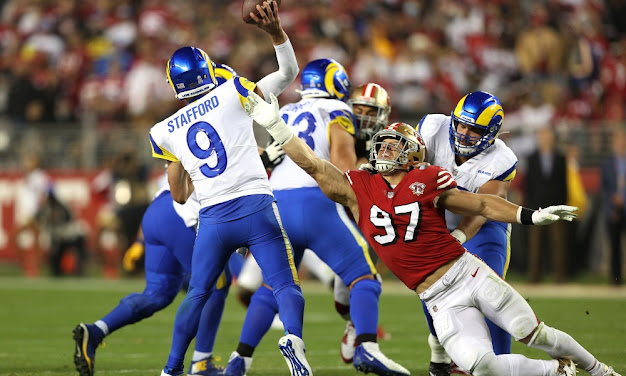 San Francisco enters week 18 with the same scenario as the Colts. However, unlike Indianapolis, they draw the #2 seed from their conference. Similar to the Colts though, San Francisco is a good football team.

Jimmy Garoppolo ($2.24) takes a lot of heat from pundits, and while some of it is justified, not all of it is. The fact of the matter is that if Jimmy Garoppolo is a top half of the league quarterback when healthy. Especially when he's paired with dangerous pass catchers and an elusive running back. It's not a coincidence that after a dismal outing against Tennessee the thumb injury was discovered which I'll attribute to that performance. While the Rams are a good opponent San Francisco has the weapons to beat them and make a deep run. Deebo Samuel (-1%, $4.47) and George Kittle (-15%, $6.17) are elite passing options and when he's healthy Eli Mitchell (19%, $2.12) has been a home run threat for this team. If they're going to pull off this win they need to be healthy.

As for the Rams, they're playing to retain the #2 seed. A loss to San Francisco could cause them to lose the division crown entirely. That being said having Cooper Kupp (-2%, $12.08) and Matt Stafford (-7%, $4.73) always helps, and I don’t believe the Rams will rest them. While the Rams have Jalen Ramsey they're going to need a complete game from both sides of the ball to lock up the division against a desperate team trying to rekindle their Superbowl run.

The best investment in this game to me is Jimmy G. While this might be his last run as the starter for San Francisco, he will garner interest this off-season amidst several other players, he’s going to feel like a consolation prize to whichever team snags him (Denver, cough cough). Trey Lance (-2%, $5.52) looked decent in his appearance but is not ready to lead this team to a Superbowl quite yet. 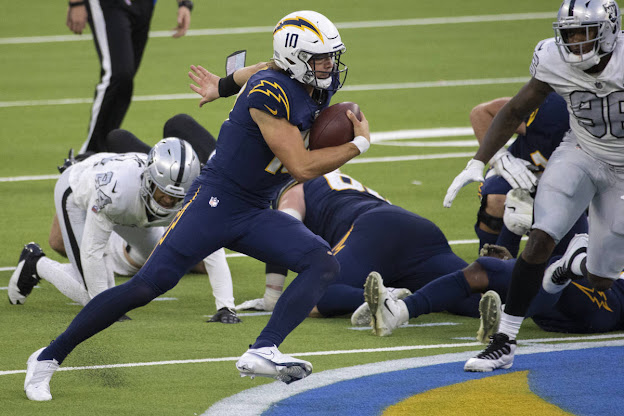 This one is for all the marbles unless it isn't (Indianapolis losing and this game ending in a tie would send them both to the postseason). Unfortunately for the Chargers if we follow the trend after Justin Herberts' (-3%, $11.35) strong performance last week he may be due for another off week. Based on the surefire mathematical trend of great one week, lousy the next! In reality, this game should be a good one and the winner punches their ticket to the postseason.

Earlier this season when the two teams played Justin Herbert was able to decimate the Raiders in large part to Las Vegas's inability to cover their tight ends. Sure Keenan Allen (-4%, $3.04) feasted but Jared Cook ($4.71), Donald Parham ($0.96), and Stephen Anderson (-15%, $0.95) combined for 9 catches 120 yards, and two touchdowns. Austin Ekeler (4%, $4.84) also went over the century mark on the ground for 117 yards and a score. The Raiders' defense was abysmal in this one and the offense was able to move the ball at will. Ironically, Mike Williams (5%, $4.03) was held in check in that game after blowing up earlier in the season.

For the Raiders to get back to the post-season, and have Derek Carr (-9%, $4.15) play in his first post-season game, they're going to need to do it offensively. Hunter Renfrow (9%, $2.01), Darren Waller (-1%, $3.37), and Josh Jacobs (4%, $1.48) are all a full go in this one. Derek Carr has little built-in excuses should the offense fail in this one as the Charger hasn't been great this year. However, Josh Jacobs may become the key to the Raiders post-season birth this Sunday. The Charger defense struggles to stop the run, and when they do it's possible to exploit them in the passing game. We should get one of the better games of the year to end the season and lock in the final seed in the AFC.