Well…how was that? What a way to end the season, but it was only fitting.  With all of the games now in the book there’s only so much we can get to! 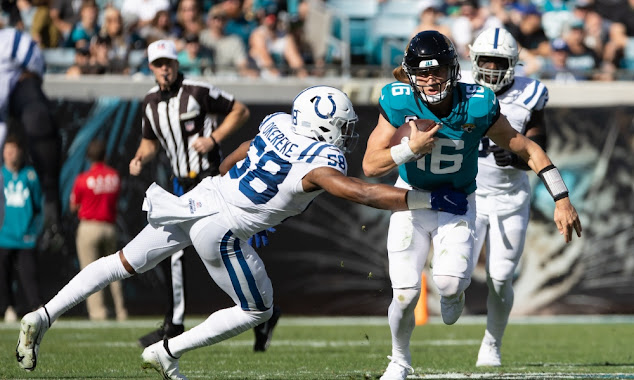 It happened, the one outcome necessary for chaos, we talked about, happened. Carson Wentz (-7%, $3.17) was a train wreck, and has been over the final two weeks. The Colts traded a 1st round pick for Wentz last off-season and are likely regretting it. All the Colts had to do was beat either the Raiders or the Jaguars to punch their playoff ticket.

The gameplan should have been simple, give Jonathan Taylor (-11%, $11.71) the ball, but instead we saw Wentz drop back 30 times in this game. Taylor was running for 5 yards per attempt in this game, and if they had stayed true to the run game there is no drama in the AFC throughout the day.

However, in lieu of the Colts winning this game we had our first sighting of good Trevor Lawrence (14%, $3.16). Lawrence threw for multiple touchdowns for the first time since playing Houston earlier this season (you know, week 1). While Lawrence has had a rough season, as we discussed last week, he is great buy low candidate. The Colts defense was exposed as they’re going to have to have to find some quality safeties this off-season. Armed with the 1st overall pick in the draft, over 50 million in cap space, and a new coach the Jaguars will be bringing in help for Lawrence in short order. They or the Jets make a lot of sense for Michael Thomas ($10.38). 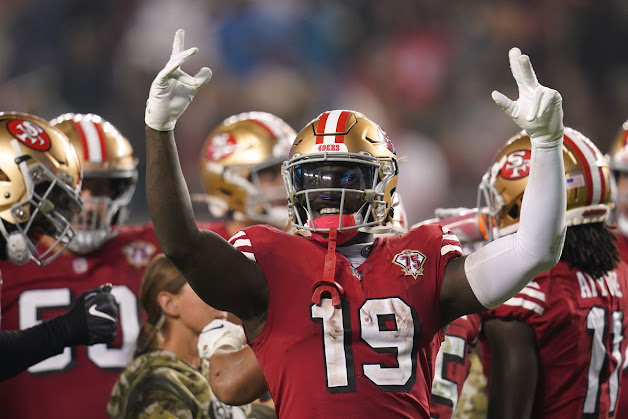 In what amounted to another win and you’re in game for San Francisco, several times throughout the game it didn’t look like they were going to pull it off. Throughout the game you could tell that Jimmy Garoppolo (-5%, $2.12) was still dealing with his thumb injury. It’s difficult to imagine he’s going to be completely healthy for the playoffs, but all you need is a chip and a chair in the NFL (as the Steelers taught us in 2006).

If San Francisco is able to go on another deep run Deebo Samuel (19%, $5.32) is going to be the player to carry them. After throwing the first touchdown for San Francisco to Jauan Jennings ( $1.01) Deebo Samuel didn’t stop there. Late in the fourth quarter after, Jalen Ramsey thought he had sealed the deal, Jimmy Garoppolo (-5%, $2.14) went back to Deebo Samuel and he delivered. While George Kittle (-15%, $5.26) and Elijah Mitchell (-8%, $1.94) were quiet in this one, the weapons are there for San Francisco to piece together their own Cinderella story circa de Steelers 2006.

The Rams may regret not being able to put them out of their misery. Sean Mcvay has yet to top Kyle Shanahan and should the Eagles defeat the Buccaneers this weekend the rematch would come sooner rather than later. Matt Stafford (-2%, $4.67) started out hot tossing three touchdowns in the first half. It was a curious decision to lean on Sony Michel (-16%, $1.61) with over 20 carries when Stafford seemed to be clicking on offense in the first half.

The major storyline out of the Rams backfield was the return of Cam Akers (1%, $6.56). Akers handled only 5 carries in this one, and was not impressive. However, in his first game back from an Achilles injury we shouldn’t have expected much out of the sophomore running back. It will be interesting to monitor the Rams this post-season and how they manage the backfield with Sony Michel and Cam Akers. Could we see a 2017 post-season Sony Michel? 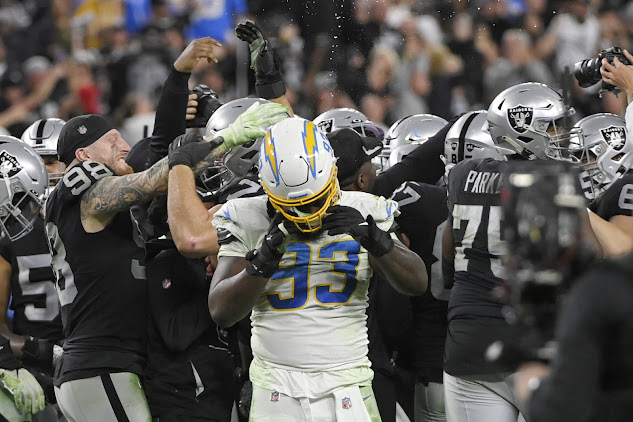 After the day had unfolded there was only one more spot to figure out for the 2022 post-season, or 2? In what was widely considered the game of the day, had both teams found a way to end in a tie the Steelers would have found their way on the outside looking in as both the Chargers and Raiders would grab the final spots in the AFC.

I’ll admit I wrote the Raiders off numerous times this year, and after their embarrassment in Kansas City I didn’t even think it was mathematically possible for them to make the playoffs. However, Derek Carr (-1%, $4.12) was able to reel this team to 4 straight victories to lock up the final berth in the post-season. Las Vegas is also getting healthy at the right time. Darren Waller (-15%, $2.87) was back in action, Josh Jacobs (10%, $1.63) appears to be 100% and Hunter Renfrow (5%, $2.11) has continued to dominate. Similar to Matt Stafford, Derek Carr appeared to be cooking with 2 1st half touchdowns. As the game went on Josh Jacobs appeared to wear down the Charger defense rushing 26 times for 132 yards.

Justin Herbert (9%, $12.37) wasn’t going to let the Raiders cruise to victory in this one. After a slow start offensively Herbert was called on to carry this team on his back in the final minutes. Scoring 15 points in the fourth quarter Herbert was able to tie the game with a dart to Mike Williams (25%, $5.02) as the clock struck 0.  After trading field goals in overtime it looked as though this game was indeed headed towards a tie. After a pair of Josh Jacobs runs the Chargers called a timeout that perhaps they wish they hadn’t. After the timeout Jacobs galloped for 8 yards to push the Raiders in field goal range to pick up the win and knock their division rivals out of the playoffs.