What a thrilling finish that was in LA! It's been a wild ride this season, and to see the Rams escape on the back of Matthew Stafford ($5.98) and Cooper Kupp (3%, $14.73). Unfortunately, if you invested in Odell Beckham Jr. (-17%, $1.91) you're going to have to wait for those investments to materialize after his unfortunate injury. I'm wishing all the best to him, and feel sick for him. But, for now...

Peaking ahead to next year

With this season in the rearview mirror, I wanted to peek at my early favorites for who could be hoisting the Lombardi this time next year. Below are my top 5 teams I think that could be poised for a super bowl run. 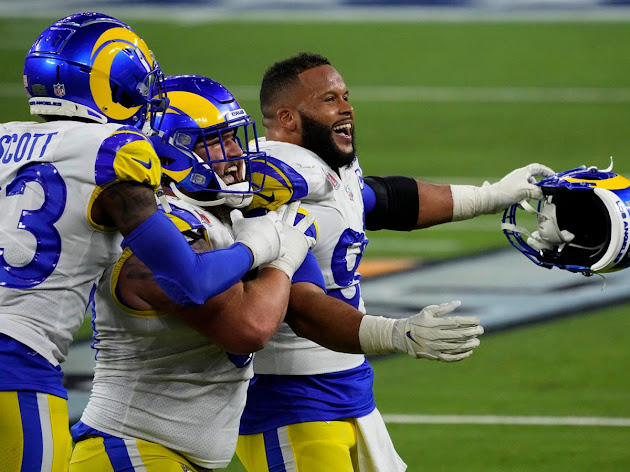 As a Bills fan, I'm sure many of are you wondering how I've come to the conclusion this team is poised for big things next season. I truly believe Ben Roethlisberger ($3.18) held this team back this season. The Steelers are loaded with talent at the receiver position with Chase Claypool ($2.46), Diontae Johnson ($2.09), and then-rookie sensation Pat Freiermuth ($2.96).

The Steelers also have TJ Watt and a young defense and roughly $40 million of cap space this off-season. Should the Steelers find themselves with Russell Wilson ($10.94) or another veteran this off-season they should instantly become a Superbowl contender.

It shouldn't surprise you I have the Bills this high entering the off-season. After losing Tre White to the Saints on Thanksgiving I wasn't so sure their defense would make it to the finish line, but Josh Allen ($26.37) sure found a way to carry this team as far as he could.

The Bills don't find themselves with a robust amount of cap space, unfortunately, and have lost offensive coordinator Brian Daboll to the New York Giants as well. However, armed with their picks this regime has proven time and time again they know how to make the most of them, and if they can find a complement to Devin Singletary (2.15) and Tre White while fixing their pass rush then this team will be a formidable opponent come next season.

The Rams have a good recipe for success to get back to the big dance next season. Matt Stafford is one of the most underrated quarterbacks in the NFL and proved this season he was not the problem in Detroit. While it does help to have Cooper Kupp and Odell Beckham to throw to, Stafford has done this for a while with Kenny Golladay ($1.04), and Nate Burleson.

I will say for as bullish as I am on the Rams, it's odd to see Cam Akers (-12%, $4.53) with so much hype after such an abysmal postseason. While it's awesome to see him come back from his Achilles injury, the truth of the matter is he has been a liability for this Rams team this postseason and has not looked like he should be the day 1 starter over Darrell Henderson ($1.17).

As you can tell I'm high on the AFC headed into next season. The Colts are a team that should've hands down been in the playoffs this season. However, Carson Wentz ($3.15) and the company had some hiccups down the stretch.

It was reported before the game Sunday that the expectation is Carson Wentz is released or traded from the Colts before the league year opens next month. While I do believe the Colts are close to being contenders, I'll add that Wentz garners too much hate and is an excellent buy-low based on his price. He finished the season with one of the best touchdowns to interception ratios in the NFL. This was all with Wentz having no real #1 wide receiver to throw to this past season, and relying heavily upon Jonathan Taylor ($11.54).

The Colts are likely in play to make a move for a veteran quarterback this off-season and are a sleeper in my mind to go all-in on Davante Adams ($11.78). The Colts are one of the few teams that would be able to squeeze their salary cap to add both him and Aaron Rodgers ($14.07) and push their chips all in next season.

San Francisco almost climbed the hill this season and tried to rectify their 2020 loss to the Chiefs. However, Jimmy Garoppolo ($1.62) wasn't able to get the job done against the Superbowl champion Los Angeles Rams. Set to leave San Francisco this off-season the pressure will be on Trey Lance ($5.53) to lead this team to the promise land next season. There's a greater than 0% Lance is a bust and isn't able to get this team to the postseason next year. However, San Francisco finds itself with a loaded roster and if Lance is indeed an upgrade of Jimmy then the sky is the limit for this team.

However, it is interesting to note that San Francisco finds itself in a similar situation to years past in that they will have little depth at the game's most important position. The problem has been health for San Francisco, and with Trey Lance being a player who relied more upon his legs than arm it's an interesting predicament they find themselves in next year. They also have no 1st round picks to build upon with Lance over these next two years.

In the end, the Bengals had a historic fairy-tale season that came up just short against the Los Angeles Rams. However, in the end, it's still the Bengals and while they're loaded with talented players like Joe Mixon (-6%, $13.23), Tee Higgins (12%, $5.89), Ja'Marr Chase (-9%, $8.95), and Tyler Boyd (-4%, $1.38) it's difficult to see this team coming back based on the history of the franchise. Joe Burrow (-7%, $7.90) had a monster season but is going to need help along the offensive line if he is going to stay healthy enough for another post-season run. Additionally, this defense needs substantial upgrades along with the secondary. If not for the OBJ injury early on I'm not so sure this Bengal team is as close to winning as they were on Sunday.