Well…today's the day. The NFL's crown jewel, and the last game of the 2021 NFL season. While it is sad to see the end of the season approaches, it has been a fun ride for us to make some money off of our investments and watch some incredible games. The good news is that while the games will disappear for 6 months, the intrigue will not. NFL Free Agency is just around the corner, as is the NFL combine and eventually the NFL draft. Don't think I'll leave you high and dry during this time, as you'll still see me around this off-season! For now, let's enjoy the game we've been given. 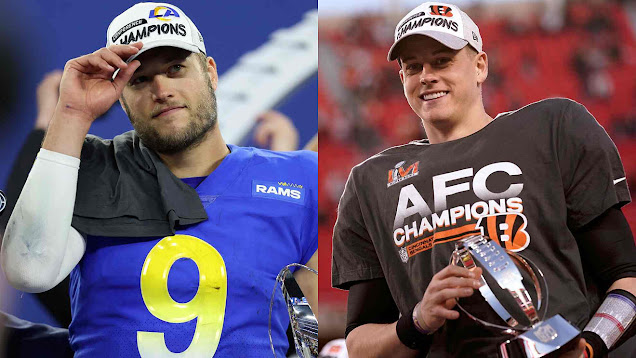 As I sit here I'm fairly confident in how I think this game will go, but I hope that I'm wrong. Joe Burrow (1%,$8.59) is a tremendous quarterback, but he can't block for himself. The Bengals are going to have to find a way to keep him on his feet and away from Aaron Donald.

If Burrow isn't allowed the time to let the play develop we'll likely not see much of an impact from Ja'Marr Chase ($9.86). Chase is a deep threat and has done most of his damage through intermediate to long-range throws, but he can do even more for the Bengals. If the Bengals can find a way to work Chase into some unique formations, much like Deebo Samuel ($4.50), then perhaps this opens up the game for the Bengals. However, I have a hard time seeing Chase break this game open due to the inadequacy of the Bengal offensive line.

Perhaps, we will see Joe Mixon ($14.05) with a heavy workload in this game. If the Bengals can get their running game going against the Rams it might prevent the defense from being able to rush the passer every down and have to guard against the threat of the run. Mixon can be the MVP of this game more so than any other player in my eyes, as he has looked spectacular in several spots this season. The one thing I'll say is that Zac Taylor has done a good job attacking defenses based on the matchup and doesn't appear to be too married to his scheme. If he sees a weakness he can exploit in the running game, he's going to take it. As such, Mixon is a lowkey high upside player!

As for the Rams, it's quite interesting. With Darrell Henderson ($1.17) coming back from injury the rumor is that we're going to see a three-down committee between him, Cam Akers ($5.17), and Sony Michel ($1.10). I believe that the best value on the Rams roster is Darrell Henderson, and I'm thinking he is going to be a substantial value for us this off-season. However, as we head into this game I'm not looking to add any shares of these players as the game plan should be a pass-centric one.

The Bengal's passing defense is one of the worst in the league. I expect Matthew Stafford ($6.04) to air it out in this game and take advantage of the Bengal secondary. Unlike the Ram's defense, the Bengal defense is beatable through the air and very much so.

The story of the playoffs has been centered around Odell Beckham Jr. ($2.23) but I'll avoid him here today. The Bengals' defense isn't great, and in fact, they've been torched by opposing WR 1's all season and I don't expect that to change tonight. Cooper Kupp ($14.29) is the Ram I'll target heavily tonight as I expect him to bananas. As I mentioned earlier, I don't view this game as particularly close and believe the Rams will pull off the win to the tune of a 35-17 or 42-10 type of ball game. The key to the game will be if Joe Mixon can carry the load and keep the Rams offense off the field.