The Super Bowl is Set

There were some lofty expectations this weekend based on how the divisional weekend went for the NFL. Ironically, this weekend lived up to the hype of last weekend. As great as these games have been, sadly, we're staring down the barrel of one more game this season. 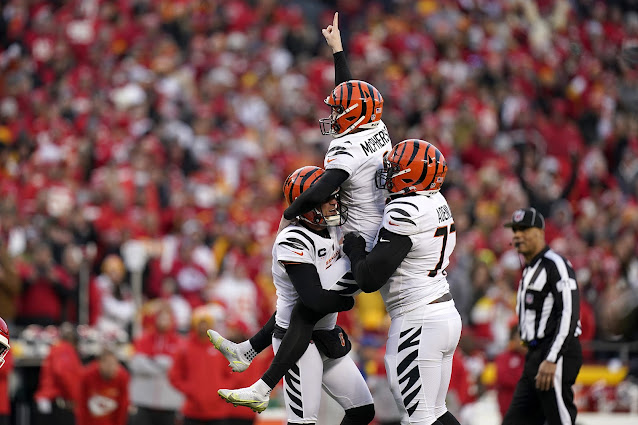 While this was a ultimately a great game, it certainly didn't look like it was trending that way through most of the first half. However, the turning point in the game came down to how the final seconds of the first half. Inside the red zone, Patrick Mahomes (-3%, $17.64) was given the green light to try once more to punch the ball in the end zone to go up 28-10, essentially going for the kill.

Mahomes dumped the ball off short to Tyreek Hill ($9.38) in hopes of him finding his way to the end zone. Unfortunately, the Chiefs came away scoreless as the play took too long to develop. It seemed as though that gave the Bengals a spark on defense, shortly after finding a spark on offense after a Samaje Perine (-3%, $0.95) touchdown.

Throughout the second half, the Bengals would bend but not break. The Chiefs were dropping passes, and the tables had turned, in dramatic fashion. Joe Burrow (5%, $8.33) led the Bengals to 14 unanswered points in the second half. Ultimately, Mahomes engineered a drive at the end of regulation to tie the game back up. If you're like me you almost felt sick, seeing this scenario play out just 7 days ago. After winning the coin toss everything was set up for Kansas City to punch their ticket to the Superbowl in two weeks.

The Bengals had other plans, however. At the end of the day, their defense stepped up in a big way. Mahomes threw a pass that looked like it was intercepted early on the drive, but it was ultimately dropped. The very next play was the dagger, Mahomes targeted Demarcus Robinson ($0.41) again and threw a costly turnover.

Burrow then would connect with Ja'Marr Chase (-2%, $9.78) on the ensuing game-winning drive for 30 yards to set up the game winning field goal. Though, to be fair, Joe Mixon (-4%, $13.99) became the closer once they got close enough for Evan McPherson to kick Cincinnati to the Super Bowl. 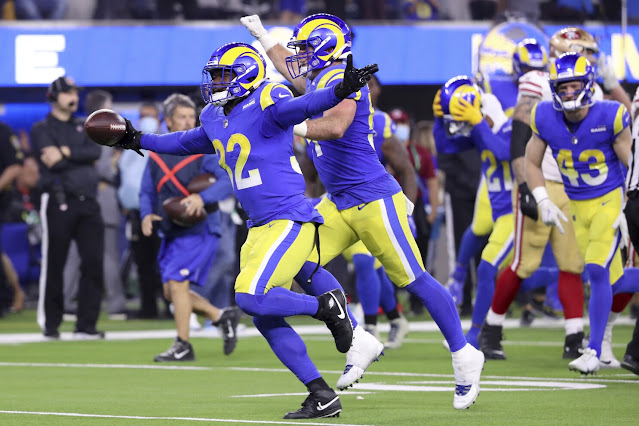 San Francisco has been doing their best impersonation of the 2006 Pittsburgh Steelers. Jimmy Garoppolo (3%, $1.62), though, has been a liability to this team throughout the playoffs as he plays through the ligament tear in his throwing hand.

As such, San Francisco has relied heavily upon Deebo Samuel (-2%, $4.51) and Elijah Mitchell (-7%, $1.71) throughout the playoffs. Before the playoffs, I was all in Elijah Mitchell, and even more so after his performance against Dallas. However, it is concerning to see a team rely so heavily upon the run and only give their running back 11 carries. Mitchell had 11 carries for a putrid 20 yards. Deebo wasn't much better as he handled 7 carries for 6 more yards than Elijah.

The lack of a run game forced Garoppolo to beat the Rams through the air. While many don't believe Jimmy can win these types of games I'd be lying if I said he played decently for most of the game considering his injury. Garoppolo had San Francisco up 17-3 in this one until the late stages of the game. It was almost poetic considering what happened two short years ago in the superbowl, and how this game ended up.

Unfortunately for San Francisco, Los Angeles acquired Matt Stafford (1%, $5.95) this off-season for situations like this. Trailing late, Stafford found household name (ok, maybe just his parent's household) Kendall Blanton (17%, $1.17) in the end zone to pull within three. The momentum felt like it was turning from that point on for the Rams. Unlike in week 18 when these teams faced off, it was the Rams who were engineering the comeback attempt. After the Blanton touchdown, the Rams would go on to score two field goals to take a 3 point lead.

Cooper Kupp (12%, $14.26) was crucial for the Rams in this one generating over 142 yards for the Rams, 25 of which came on their final scoring drive to go up 3. What's even scarier is seeing vintage Odell Beckham Jr. (19%, $2.09) go off for 113 yards of his own. Both players made significant plays down the stretch to take the lead in the final moments. However, after the final drive, San Francisco still had hope with just under 2:00 left to go they were getting the ball back.

Garoppolo however, couldn't get the job done. After an incompletion and negative yardage, Garoppolo threw a back-breaking interception to seal the fate of San Francisco. While this has been the norm for Jimmy, it's important to remember he was battling injury and is an excellent cheap option as we enter the off-season. I believe Jimmy Garoppolo is a starting quarterback in the NFL, comparable to Alex Smith (IE top half of the league, but needs good pieces around him). The quarterback carousel is quickly approaching and it's not out of the possibility we see Garoppolo in a Denver or Pittsburgh jersey in another offense featuring numerous weapons.