Good morning, everyone, and welcome to the NFL season’s first Blue Chips and Penny Stocks article. We took a little hiatus during the slow summer months, but don't you worry, we are back with a vengeance.

But before that... housekeeping reminder that you can STILL become a PS Black Member TODAY. That includes:

Oh, and check out our merch store here: https://store.predictionstrike.com/! Per your request, we've released some top-notch merch. There's a limited quantity and will only be around for a limited time, so make sure to get on it!

Now, back to business.

For all you newer users who might not have read the BCPS article in the past, let me give you a little taste of what to expect. Each week, I will lay out a few of my favorites buys for the NFL and NBA season. Now that UFC is basically every weekend, we might sprinkle in some fighters, but I may or may not save that for end of week Insider Trading articles, haven’t decided quite yet.

For now, though, to celebrate the early days of the 2022/2023 NFL season, it will be all NFL, all the time. Today's BCPS article will focus on two penny stocks with serious upside. For any of you who don’t know, a penny stock might not necessarily be worth literal pennies. In this case we are talking about non household names. Your household names will be what we consider Blue Chips. Blue Chips are usually a safer bet, and throughout the season, we will help you find matchups to capitalize on. For Penny Stocks, we are looking for the potential moonshots. These are the guys that aren’t talked about on ESPN, but if the stars align, could pay out major returns on investments. Today we have two penny stocks that are going to be taking advantage of unfortunate circumstances. Two west coast guys, but these stocks are going North. Let’s get into it! 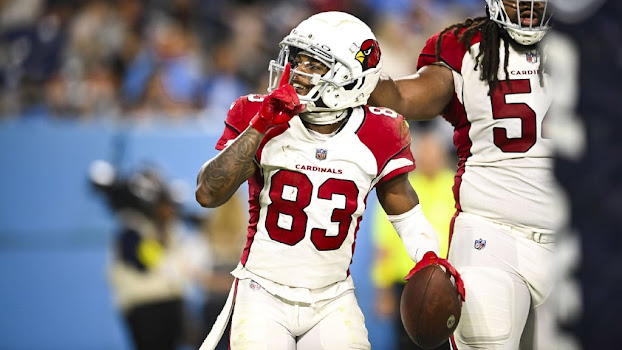 The point of this article is to introduce investors to players somewhat off the radar. It would be easy for me to come on here and praise the likes of Cooper Kupp (+6%, $16.47) or Justin Jefferson (+28%, $14.03), and tell you to add them to your portfolio. The fact is they are great, and you probably should add them to your portfolio, but you don’t need me to tell you that. Those are the easy ones. No, the point of this is to find the gems you might not think of. One of those gems might be Greg Dortch.

If you don’t know the name, don't feel bad. I didn’t either until this past weekend. Dortch was an undrafted signee to the New York Jets practice squad in 2019, and has bounced around a couple teams until he finally landed with the Arizona Cardinals. He did manage to play in a couple games last season, tallying a not-so-impressive 3 receptions for 15 yards in three games. But he clearly showed the coaching staff something, because he entered the 2022 season as the number two slot receiver on the depth chart behind Rondale Moore ($2.05). We never applaud injury, but we do realize injury=opportunity. Enter Greg Dortch in Week 1.

As a whole, the Cardinals had a miserable time moving the football on offense, and an even worse time defending Mahomes (+13%, $19.81) and the boys on defense, but the one glimmering light of hope was our guy Greg Dortch. He led the Cardinals in targets with 9, led the team in catches with 7, and to finish off the triple crown, led the team in yards with 63. Now, he didn’t get the always-coveted touchdown, or even a target in the endzone, but his slot production doesn’t necessarily need the endzone to be a money printing stock. A touchdown will just be the massive cherry on top of the sundae if he does find himself in the endzone on Sunday. The next thing to consider is player projection. At the time of writing, his projection has not yet been updated on PredictionStrike, but I can confidently say it will be between six fpts and 9 fpts based off what I am seeing on other projection sites. This is the perfect goldilocks zone for a streaming slot receiver. Just enough for his projection to mean something, and low enough for us to smash it! Dortch scored 13.3 fpts last Sunday against the Chiefs, and will face the bend-but-doesn’t-break defense in the Las Vegas Raiders…

Two quick notes about this matchup. The Raiders have a decent defense, but a potentially powerhouse offense with the addition of DaVante Adams (+15%, $13.54). If the Cardinals want to keep it close, they will need to score points in bunches. I think Kyler (-.16%, $5.02) can take advantage of what should be a weakness defending the slot receiver. The Raiders last game was a lose to the Los Angeles Chargers with the score of 24-19. The slot receiver for the Chargers was able to score 15.4 fpts against the Raiders in a relatively low scoring game. The Cardinals don’t need to score tons of points for Dortch to have a successful week, but if they start lighting up the scoreboard, we could be looking at a major return on investment in week two! Needless to say, this is all for not if Rondale Moore is declared healthy for week two. In that case pivot hard to Rondale Moore! Everything I said applies x10 for Moore! 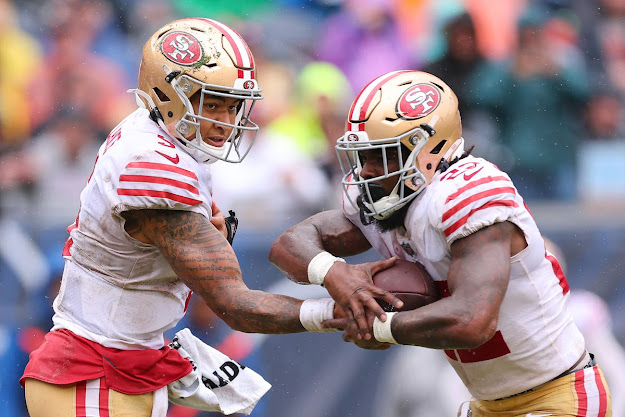 For all you fantasy football buffs out there, this one is a no brainer. I feel like the football season doesn’t start until the 49ers lose at least one running back to injury. Unfortunately for the 49ers and anyone who picked him in fantasy drafts wayyy too early, Elijah Mitchell (-21%, $1.37) went down in the week one matchup against the Bears with a knee injury. Never a good sign for running backs, especially the fragile 49ers backfield. This was originally a wait and see stock for me until Adam Schefter tweeted Monday afternoon that Eli Mitchell will most likely be out for the next two months. If we know anything about the 49ers and Kyle Shanahan, they love force feeding their RB1 with as much as he can handle. Wilson will be the next man up, and received the RB1 workload when Mitchell went down on Sunday. Unfortunately for Wilson, he was not able to get much going, mostly due to the monsoon type rain that was plaguing Chicago on Sunday, and I am confident he will perform next weekend and beyond. He will be the bell cow for San Fran, with the only competition coming from rookie Tyrion Davis-Price ($2.77), who didn’t even suit up on Sunday.

If anyone is second guessing this stock, just look back at history. The last time Wilson took over a major role in the 49ers backfield was 2020 where he scored an impressive 10 touchdowns. So, to recap, we have a RB1 in a Kyle Shanahan offense, with great pass catching ability, a nose for the end zone, and should be in that role for two months? All that, and he's only $1.54 (at the time of writing). Yes, please! Expect a 12-15fpts projection, and buy with confidence.

That’s it for today, everyone! Be ready for an Insider Trading article before Monday's doubleheader. If you have any questions about investing, or strategy, feel free to reach out on Twitter, @ChipsStocks. I know it kind of sounds crazy, but we are mere weeks away from the NBA season! We will start going deep into the rookies, and find the best stock to get in early, and reap the benefits. I look forward to returning some major profits with everyone!