Can you feel it? I am sure you woke up this morning and noticed it, but can you FEEL it? No, I am not talking about the Fall weather and the leaves on the ground, I am talking about something much more noticeable. The start of the NBA season! We have finally made it, everyone rejoice! Yes, football is my one true love, and baseball is awesome, but when it comes to PredictionStrike, nothing hits like the NBA. And for that reason, we’re celebrating with…

Get a free share for every $25 in deposits, up to $5000. Now through Friday night! Don’t forget, you can also become a PS Black Member, which will include…

Anyway, this is the season where stocks routinely give investors BIG returns with nonstop action since there are so many games. The NBA is where we have our highest priced stocks on average, and the largest profiting stocks. Before the stock split, Nikola Jokic was well over $60 a share! This is the same league where rookies can go for 100-300% returns in a single season! Don’t believe me, just look at Cade Cunningham ($19.92)! That is where my bread gets buttered. Targeting rookies, and riding the coattails to a massive return. And boy do we have some exciting rookies debuting this week, one in particular everyone is extra excited for.

For those of you on the PredictionStrike Discord Channel, you probably know who it is, and that is one Paolo Banchero (+9.72%, $7.11). He is the rookie I am most excited about, so I wanted to take a deeper dive into Paolo, and the Orlando Magic as a whole unit. That is why I have reached out to one of the coolest dudes on the internet, and someone I consider a friend, Mr. Wells Fournie, AKA, Fournstar! Not only is Wells the face of PredictionStrike TikTok, he is also one of the biggest Magic fans around. With his mix of PredictionStrike knowledge, and Magic expertise, he was the perfect match for this week's Blue Chips Beat Report. Enjoy! 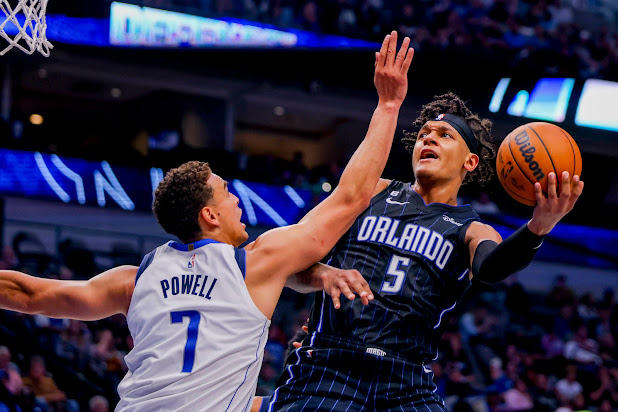 Alex: The Magic have a very young core, and they just got even younger at this year's NBA draft, taking Duke standout Paolo Banchero with the number one overall pick. Experts are saying he’s the most NBA ready player coming out of this year's draft, and he definitely showed that off in his brief stint in summer league. In your opinion, what is a good player comp for those who have not had the pleasure of watching him play?

Wells: For a player comp, I’m not entirely sure if there is really one I like putting him to as he really is his own kind of player. I think the biggest thing to note about him is that he really fits the mold for the Magic and is exactly what we were looking for. His ability to draw defenders and then find the open man is something that I really liked about him and think will help him stand apart from this rookie class. I wouldn’t say to compare him to Shaq or Dwight, but that’s the last two number 1 draft picks we’ve taken, so I’m expecting big things from Paolo. Paolo has the chance to be the centerpiece for a potential Magic dynasty.

Alex: NBA rookies are known by savvy investors for their immense potential on PredictionStrike. Some players can see upwards of 100-200% gains over the course of the season. Will we be adding Paolo’s name to that group at the end of the year?

Wells: It’s high expectations, but I’d expect him to be closer to 300% as I think he is going to dominate on the stat sheets. He is a guy in my opinion that could be a triple double player in his rookie year. I know that’s a tall order for a rookie, especially one who turned over the ball as much as he did in Summer League, but when selecting draft picks, the Magic have a strong track record… they just usually trade them away. I think under the new management in coaching, they really want to build this team as a unit rather than hyper fixate on a specific individual. You can see it also in how they support each other, a lot of the key members on the team went to watch and support the whole Summer League. Paolo will be playing in that 4 spot, but I imagine will be running/be used in a lot of pick and roll play as we’ll have three players starting over 6’10 in those 3-4-5 spots.

Alex: Speaking of that prestigious group of rookies who gain triple digit ROI, we have to mention Franz Wagner ($7.94). You were the captain of the Franz fan club last year on PredictionStrike, so we are talking to an expert! Can you tell the folks who aren’t familiar with him, who Franz is, and what he accomplished in his rookie season? Do you see him repeating in his sophomore campaign?

Wells: I’m actually expecting Franz to have one of the biggest leaps amongst his class in his second year. Yes, I am a bit biased, but he’s the player who benefits the most. I think he’ll be under-projected with the addition of Paolo. I mentioned it earlier, but having three guys on the court all over 6’10 in a pick and roll scheme is going to be nasty. Franz was a first team All-Rookie last year, but is primarily just a scorer, not too much else. His footwork is impeccable and he has a real eye for scoring. I think his assists will go up slightly in addition, but I’m really expecting him and Paolo to spread the court and force a lot of teams into size mismatches with the ball.

Alex: The Magic didn’t make any splashy moves in free agency, but they were able to re-sign Mo Bamba ($0.48) and Gary Harris ($0.80). Neither are going to blow your socks off, but will both be pivotal players if the Magic will have success this season. Do you see either of them being relevant on PredictionStrike?

Wells: Honestly, no. I think they were re-signed mainly to see if either they will pan out into something or potentially used in a trade down the line. I think Bamba will be the backup 4 for this team and I’m not really expecting any minutes from Gary Harris just yet. If anything, just a role player.

Alex: As previously mentioned, the Magic have a very young core. We will end this interview with a simple question. If you could only pick one stock of all the young players with immense potential on the Magic to buy and hold for the upcoming season, who would it be, and why?

Wells: I mean the obvious answer is Paolo, but I want to lean towards the pair of brothers I am personally obsessed with in that of Mo and Franz. When those two are on the court, more and more positive things happen. Franz is the better option of the two, but I believe that Mo will get more and more as the season comes to fruition. Franz was extremely impressive in Summer league and will be more of a focal point than people realize on this team. In addition to that, when Mo plays it’s clear to me he’s running the offense for the backup squad and I love the value he brings from a chemistry standpoint. He really pulls the team together and motivates them more often than not from the bench. Also, find me a bench player who has gotten in more All-Star players heads than Mo Wagner, because I can think of none. He’s established his real estate in their heads and will get more time on the court as time goes on. It’s time to go long on the Wagner brothers if you haven’t already.

I mean, if that doesn’t get you excited to invest in Magic basketball, I don’t know what will! I have personally already invested in Paolo as a season long hold, and it's not too late for you to do the same! The Magic play their first game tonight on the road against the Detroit Pistons, where Paolo and the Magic will face fellow rookie Jaden Ivey, and the aforementioned Cade Cunningham. These three players alone will be a reason to watch, so sit back, enjoy, and watch those portfolios soar! I want to thank Wells once again for the incredible Orlando insight, and for all he does for the PredictionStrike community! As a thank you, I want all of you to show him some love in the Discord, and more importantly, follow PredictionStrike on Tik Tok where you will see today's guest in action! I hope everyone has a great week investing in the NBA, and I will see you very soon for the much anticipated UFC 280 PPV going down this Saturday! Be on the lookout Friday night, or early Saturday morning for a MMA centric newsletter. Until then...