Another week is down the drain and the injury bug appears to be piling up around the league. Things are getting interesting, and the trend of low upside running backs is continuing. With that said, there was some major game played this weekend that might end up being pivotal later in the season when the league goes from 32 to 14. 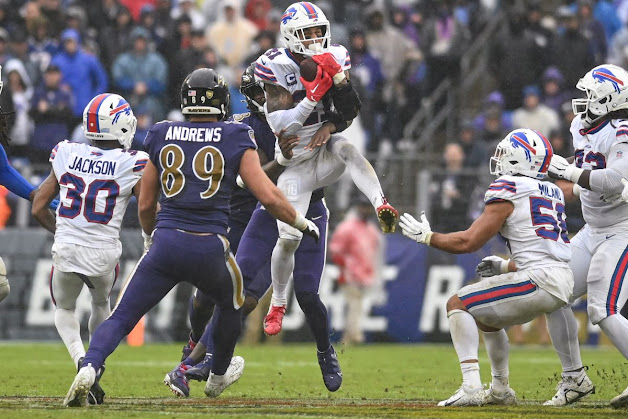 This was an interesting game and will have major playoff implications come December. Josh Allen ($29.68, -2%) started his young career in Baltimore when Nathan Peterman ($0.24)) couldn't get it going years ago. It was somewhat of a nostalgic game for the two teams as both Josh Allen and Lamar Jackson ($7.03, -9%) came from the same draft class and have become heavyweights of the NFL.

Lamar Jackson had been unstoppable to this point through the air and on the ground coming into this game. One would think with all of the injuries to the Bills' secondary that they would struggle to contain Jackson. However, that couldn't be further from the truth. The Bills were able to hold Jackson under 250 total yards and held Mark Andrews ($12.77, -19%) to a measly 15. Outside of JK Dobbins ($6.13, 27%), the Ravens' offense had a day to forget…much like any other team that has played this defense this season.

While the Ravens struggled, they did control this game early on and throughout most of the game. As the Bills weren't able to do much offensively limiting Josh Allen to only 1 touchdown in the first half. While both offenses struggled in this contest, I found it noteworthy that Devin Singletary (2.33) received a bulk of the snaps again at the position. This trend has continued which makes James Cook ($3.23) a risky investment, but again I believe he is too talented not to get a shot at some point this season.

Lastly, this Buffalo team is starting to get thin at wide receiver. Jamison Crowder ($3.53) appeared to be on crutches after the game. This is paired with a concussion delivered to Isaiah McKenzie ($1.59, 4%). It will be interesting if the injuries continue to pile up if they can withstand this and escape the season with their first #1 seed in at least 20 years. 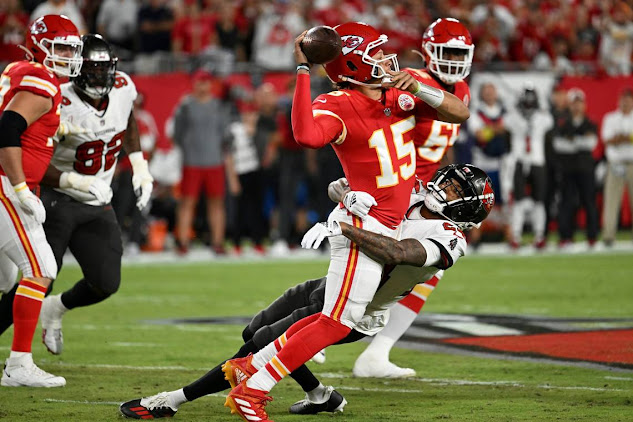 Patrick Mahomes ($17.92, 4%) and Tom Brady ($13.59, 8%) will easily go down as 2 of the greatest quarterbacks of all time. In what looked like it could be one of the best games of the season, we ended up getting the only game Sunday that wasn't decided by 7 points or fewer according to Mike Florio of profootballtalk.com.

Tom Brady did about all he could in this one to try and keep pace with the Chiefs. Unfortunately, it just wasn't enough. Chris Godwin ($10.01, 5%) and Mike Evans ($12.64, 20%) were both back in action in this game and were frequent targets of Tommy.

As promised by the coaching staff, we saw Rachaad White ($2.87, 1%) more involved for Tampa Bay Sunday night. While neither Fournette ($9.633%) nor White looked great Sunday night, White escaped the night looking like the more superior runner. White at least had positive yardage on his 3 carries as opposed to Leonard Fournette.

As for the Chiefs, it's getting harder and harder to write off Clyde Edwards-Helaire ($3.18, 20%). While the volume of carries is concerning, Clyde is making good use of them. Clyde was able to rack up 2 scores in this contest and is looking more and more like the LSU version than what we have seen in his first two years in the league.

Patrick Mahomes threw for 3 scores well continuing his brilliance that we should be accustomed to as well. It's quite hilarious how a season ago his value was continuing to drop each week as he hit a rough patch, and this year he's back to being his old self. As this team continues to grow, one would hope that a true wide receiver #1 emerges for this team. 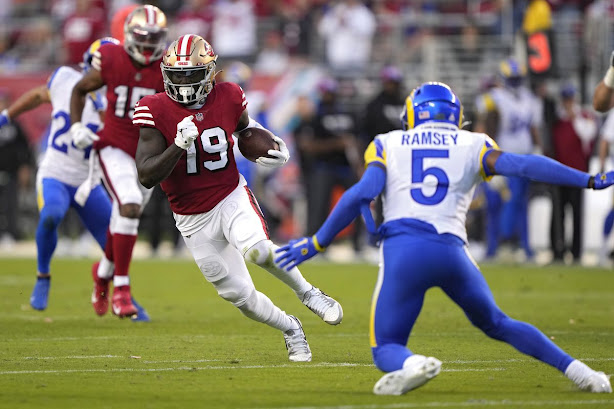 To close out the week another major storyline has emerged in my eyes in Matt Stafford ($4.04, -15%). Stafford has off-season surgery to fix tendonitis in his arm, and it has become more apparent this season that something is off.

Last season Stafford had one of his best years as a pro and by all measures looked poised to do it again.  However, throughout the first quarter of the season, we haven't seen this offense take any step but backward.

Not only has Stafford regressed from last season but even Darrell Henderson ($0.99, -5%) appears to be seeing less and less work as Cam Akers ($2.87, -20%) has started to eat into his workload. Akers had no targets in the passing game but did out-touch Henderson on a carries basis by one carry. Both backs ended up being ineffective in this game as the offense failed to score any points in this one.

San Francisco on the other hand didn't have to do much to win this game and continue their domination against the Rams. I'm convinced it doesn't matter who is throwing Deebo Samuel ($4.45, 9%) the ball, as once again he put the team on his back and was the best player on offense in this one. Jimmy Garoppolo ($1.48) moved to 7-0 against the Rams and it only took one touchdown from him tonight to do. In all, it helps when your defense plays lights out, but the lack of spark this Rams team has had this season should leave any Ram's investor, outside of Cooper Kupp, worried. And for good reason.