Another solid week of action is in the books this week, and we are now a few short days away from the return of Deandre Hopkins ($4.46) to all of my best ball leagues and investments. That can't do anything but help Kyler Murray ($4.47, -8%) I imagine? 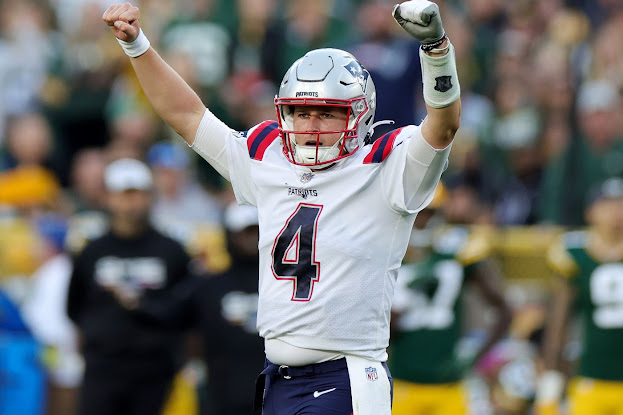 It seems odd to say that there is a chance he doesn't let this job go, and that could spell trouble for one Mac Jones ($1.88). Additionally, and less surprising, Rhamondre Stevenson ($2.92, 15%) unleashed his inner Marshawn Lynch this past weekend going off for over 70 yards and 2 scores. Combined these two players scored 4 of the 5 Patriots touchdowns against a Browns team that had no answers on Sunday.

The Browns started the season off looking like they might be able to bridge the gap until the return of Deshaun Watson ($14.52), but in recent weeks it's starting to look like a daunting task. Jacoby Brissett ($0.59, -12%) started the season off meeting or beating projections the first 3 weeks, but has failed to surpass them the last two weeks. It's going to be interesting to monitor this season and whether they can stay afloat with 5 more games until the return of Watson who significantly improves the teams' odds of winning.

In all, New England is doing what they typically do along the lines of starting rough and figuring it out during the season. While the Bills remain the favorite, this division could be the first to send an entire division to the playoffs if they all continue their current level of play…well maybe not the Dolphins. 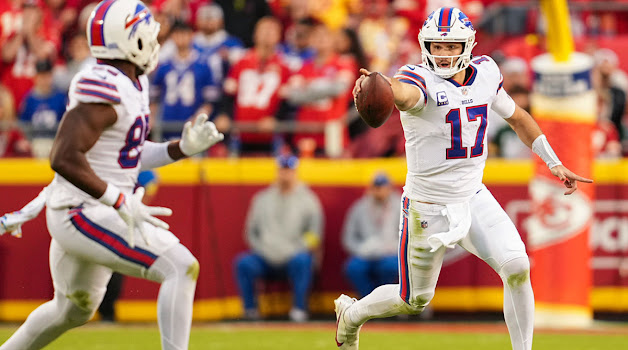 This was the game of the week heading into the weekend, and it didn't disappoint. While it wasn't the high-scoring affair we all anticipated, it was still the most entertaining game of the week.

Patrick Mahomes ($18.74,) and company got the full Buffalo experience in this one, as it's becoming apparent every week this defense is for real. While still tossing 40 balls for over 300 yards, it was the defense that got the ball twice from Mahomes in two critical situations.

Throughout the game, Mahomes was leaning heavily upon Juju Smith-Schuster ($2.14, 16%), and Travis Kelce ($11.96, 5%)) who accounted for almost 2/3rd of the total passing yardage for Mahomes. Similar to what we've seen all season Skyy Moore ($4.14) still looks to be the missing person on the local milk carton with one catch.

Additionally, while Clyde Edwards-Helaire ($2.25, -29%) has been making plays this season it's noteworthy the Chiefs seemed to stray away from the run game, which has been a traditional struggle of this scheme. Most of the team averaged over 4 yards per carry, but it didn't look like the Chiefs wanted to push the issue against the Bills and perhaps they should have stayed on the ground with how tight the game was.

Part of the benefit of running the ball is that it keeps Josh Allen ($32.50) off the field. While he didn't light up on the scoreboard, there was no shortage of spectacular plays in this one. Similar to what we've seen in recent years, Allen made the highlight hurdle when the game was on the line.

The hardest part of investing in such a high-powered offense is that sometimes you never know who the beneficiary is going to be in a given week. After Gabriel Davis ($4.33, 7%)) went off last week, Stefon Diggs ($9.23, 12%) put on a clinic for young receivers catching ten balls for almost 150 yards and a touchdown. While Diggs dominated the game, it certainly looked like whatever the receivers wanted to do on Sunday they were able to do against this defense.

Lastly, Devin Singletary ($2.19, 8%) had a very good first half in this game but failed to get much done in the second half. With the healthy scratch of Zack Moss ($1.44) perhaps now is the time we start to see the emergence of James Cook ($3.23) once Buffalo comes back from the bye week. 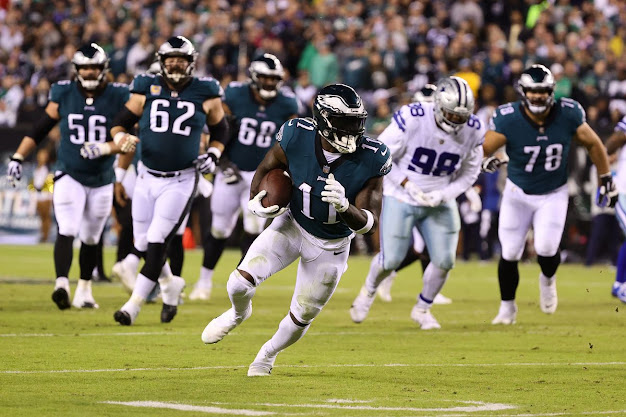 While the game looked like a matchup of the two of the best teams in the NFC, it's certainly looking like the Eagles might be in a class of their own. While they allowed the Cowboys to stay alive for most of the game, the Eagles certainly look like a team who might have the easiest path to the Superbowl with the NFC looking anything like competitive.

Cooper Rush ($1.01) had the type of game we expected weeks ago, throwing three interceptions and completing less than half of his passes. Cowboys fans will be happy to get Dak Prescott ($7.59) back I imagine after the minority wondered what the long-term status was of their signal caller. We knew Rush was a placeholder, and after Sunday's performance, all doubt should be subsided.

While the game wasn't as interesting as it looked on paper, we did learn just how good Philadelphia is. Investing in this Eagles offense appears to be one of the safest investments on the season. Even in such a bad performance, they were still able to get points on the board against one of the best defenses in the NFL.