Another eventful week is in the books, and we're getting closer to cutting the league by over 50% as we head into the postseason. Unfortunately, this wasn't the greatest week of action in terms of fantasy for many. 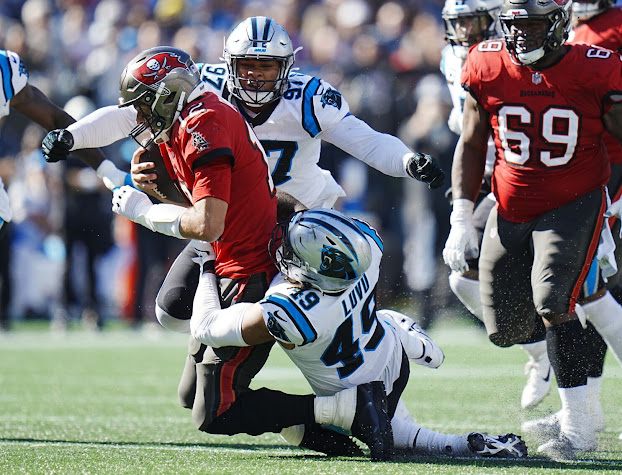 If you ever want to get me with old takes exposed…oh boy did I whiff on this game. Tom Brady ($11.59, -9%) looks closer to the end than at any point in his career. This game appeared closed for almost its entirety but never really felt like Tampa had a lifeline.

Mike Evans ($10.90) dropped an early pass in what could have set the tempo for the entire game. Instead after that drop, it looked like Tampa had lost some of its luster. Perhaps Brady isn't all in, or perhaps his situation is starting to affect his play. In either scenario, the pundits will blame Brady for this loss, but the loss goes far beyond #12.

Leonard Fournette looked like he was running with cement blocks on his legs. He struggled to get anything going in this game and might be headed for greener pastures along with Brady this off-season. We could see an eventual youth movement toward Rachaad White ($2.37, -9%) depending on how this season shakes out. Along with Fournette, and the drop by Evans this team has some soul-searching to do.

While I completely missed the ball on the Buccaneers, I was right about the Carolina Panthers. PJ Walker ($0.79, 14%) appeared to deliver competent play and made the most out of DJ Moore ($0.84, 24%). The Panthers have told us they view DJ Moore as a cornerstone piece, and that remains to be seen as we approach the deadline. Speculation will heat up this week as to whether more pieces get moved or not.

The younger core pieces of Terrance Marshall ($1.73), and Chuba Hubbard ($3.65, 32%) appeared to help as well. While Marshall dropped his target he was open, and I wonder how he will do down the stretch this season should the team move on from Moore. I don't buy many of these weapons as long-term investments but they were excellent short terms ones, and perhaps Marshall can be a great long-term one. 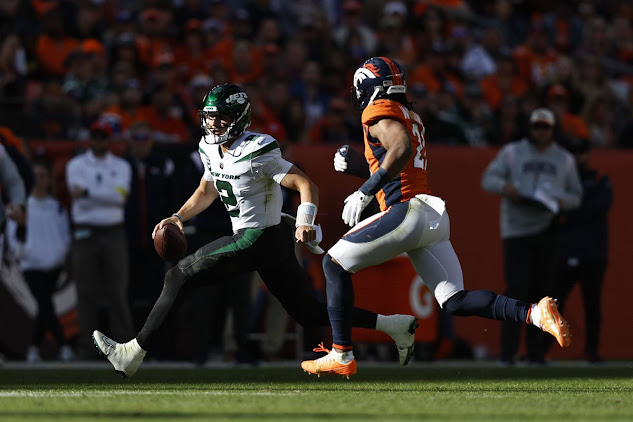 The grave for Nathaniel Hacketts' coaching career continues to be dug weekly. It has become so apparent there are even rumors he may be the first-ever coach fired in year 1 during that season. While Russell Wilson ($8.16, -3%) didn't play Brett Rypien ($0.89, -7%) played well enough to win this game.

Jerry Jeudy ($1.50, 4$) appeared to have one of his better games of the year with Rypien under center and was the lone bright spot on offense. Melvin Gordon ($5.63, -20%) continued to be benched essentially only getting 10 carries for 33 yards delivering the same results in essence to the 8 carries of Latavius Murray ($3.40, 7%) who at least got the lone Bronco touchdown. In all, it's obvious we shouldn't be wasting time investing in this Broncos team.

As for the Jets, we have another blow to the dynasty community with Breece Hall ($11.10, -5%) suffering a torn ACL. This injury elevates Michael Carter ($3.34, 8%) for the rest of the season, or at least until James Robinson ($1.00, -21%) learns the playbook, and he could be a really good investment based on well this team has been running the ball. The Jets are going to have to lean on Zach Wilson ($3.25, -10%) the rest of the way and see if he's able to carry this team to the promised land or at least the playoffs. It also remains to be seen what the Jets end up doing with Elijah Moore ($5.65), who single-handedly looks to knock the Jets out of the playoff race with his demand to be traded. Until we get more clarity, look for Garrett Wilson ($5.20, -8%) to continue to be the main target along with Corey Davis ($1.01, -22%). 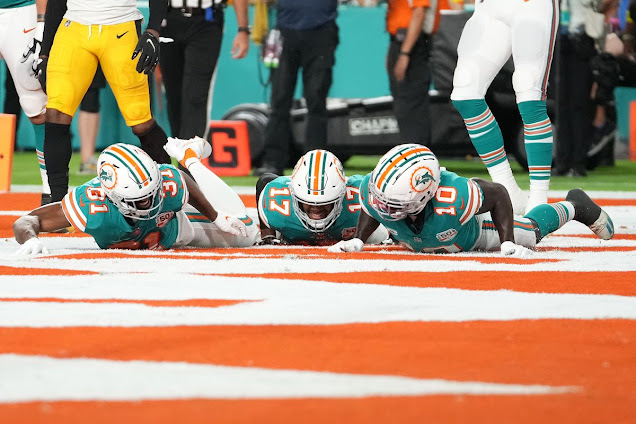 This game essentially lived up to its low expectations. While the game was close, it was Kenny Pickett ($3.13, -5%) is going to have to learn to not lose games early in his career. Many pundits will write Pickett off as a bust, and he very well could be, but I think any determination of him through less than half a season is unjust. Even when I openly criticize Justin Fields ($3.27), I openly will admit those players prove me wrong.

In the case of Kenny Pickett, it's hard for me to think it will not work on some level based on the talent that is around him at the moment. With George Pickens ($5.40, 17%), Diontae Johnson ($1.46, -6%), and maybe Chase Claypool ($2.32, -4%) around him it'll be hard to see him fall on his face. He's learning to read defense just like any rookie, and I think by the season's end we will see real progress with him and his weapons.

However, the Dolphins won this game and are happy to end their losing streak. I again will say I'm less than impressed with the performance of Tua Tagovailoa ($3.34, -2%). While Tua completed almost 2/3rd of his passes, he still hasn't delivered an impressive performance against an impressive team to me or done it on a consistent level. I believe that truly limits his ceiling which is necessary when breaking down investments.

As far as the pass catchers go, Tyreek Hill ($12.50) and Jaylen Waddle ($8.21, -4%) have impressed me immensely this season. I had questions as to whether or now the Dolphins would be able to support 2 top 24 wide receivers and will take another loss on that front. In all, I think the receivers are solid long-term investments this season.